A Butterfly that takes flight for the heights 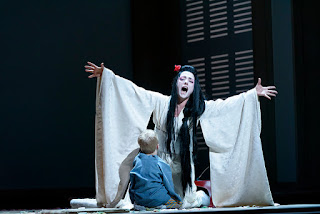 Over the years, Puccini might have been scorned by some as penning scandalous operas, but his works hold four spots in the top 25 operas performed globally. Only Verdi has more entries.

Scoff at the plots if you want, but these works are much loved.

At number six is Madama Butterfly, currently enjoying a run at the Royal Opera House and the latest stop on my own operatic journey.

The plot is wafer thin: US naval officer marries teenage Japanese woman, gets her pregnant, leaves, returns three years later with American wife and demands they take the child, leaving her to kill herself.

Based on real events, part of its power is that however easily and quickly you can outline that story, there is far more to it than simple melodrama.

At the core of events is the callous nature of US imperialism (and imperialism and colonialism in general) and its inherent racism.

Even before we see Butterfly herself, Pinkerton has made it clear that theirs will be a marriage of convenience until he finds a ‘proper’ American wife, and that he regards Japanese customs around contracts and divorce as being amusingly easy to subvert to his whims.

Butterfly has converted to Christianity secretly before the wedding, taking her impending marriage incredibly seriously and determined to fully become American. Yet not only has Pinkerton no intention of taking her to the US, her own family, on discovering her conversion, disown her.

Here then are ideas to contemplate about the interaction of cultures.

Ermonela Jaho – described by The Economist as one of the world’s most acclaimed soporanos – is simply wonderful as the eponymous Butterfly, conveying the necessary vulnerability of the character, but without overdoing the sense of victimhood or making her naïve faith in Pinkerton seem unbelievable.

Her singing is simply gorgeous – and Un be di vedremo, when she explains how she believes that, one fine day, Pinkerton will return to her, is one of those moments when the goosebumps rush across the skin and the eyes prick.

Marcelo Puente as Pinkerton is a fine tenor and does well to bring some multi-dimensionality to this deeply unsympathetic character (there were one or two boos when he took his bow at the end).

Antonio Papano and the house orchestra are bang on form in a production that is simply a joy.

You have a few chances left to see this revival (albeit without Jaho). My goodness – it’s a powerful experience that promises to stay with one for some time.

Posted by Amanda Kendal at 20:17 No comments:

Courage and love amid the brutality of apartheid 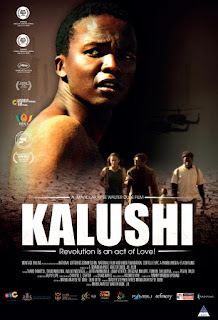 In 1976 in South Africa, riot police shot and killed black children and young people who were protesting against being taught many of their lessons in Afrikaans, viewed as the language of apartheid.

The government tried to claim the death toll was 23 students. It is usually now given as 176, but some estimates put it at up to 700.

One of those influenced by the massacre was Solomon Kalushi Mahlangu, who joined the ANC’s militant wing, Umkhonto we Sizwe (MK) shortly after.

After training, he and two comrades were sent back to South Africa with pamphlets and arms. But when the mission went wrong, all three tried to flee police.

Mondy Motloung shot two innocent civilians before he and Solomon were caught.

After it dawned on the authorities that torturing Mondy to the point of severe brain damage meant it couldn’t make him stand trial, they decided that Solomon would be the one to pay, under a doctrine of common purpose, though he had not shot anyone.

Mandla Dube, a US-trained cinematographer who has lectured at Wits University, has spent nine years bringing Kalushi to the big screen.

At a QnA after a BFI screening on 6 April – the date of the arrival of Jan Van Riebeeck in the Cape in 1652 and thus the date symbolically chosen for Solomon’s execution in 1979 – the director made it clear that they had not set out to make a film about apartheid: it is, instead, the story of one young man’s rite of passage; of what he does when he’s been backed into a corner.

But while one of those present whined that there was no politics in the film, this is utterly ridiculous: if apartheid (and politics) is not the theme of the film, then it is the context, and in that respect, the film is most certainly a political film.

How else could it be?

It depicts the state-sanctioned murder of children; brutality, torture and humiliation meted out by police; a corrupt judiciary and political regime that deliberately sets up to use the system to take symbolic revenge, irrespective of the facts of a case.

The same whinger also tried to complain that the film had not mentioned Angolan training camps where Cubans helped to train the volunteers. At this point, he was getting really funny looks, because, y’know, that white geezer in military uniform, with the beret, the Spanish accent and the great big cigar …

One can only assume that it was all too subtle for someone who was desperate that the protests outside the South African embassy in Trafalgar Square should somehow have been shoehorned into the story – presumably so that he himself could claim some of the glory for the defeat of apartheid.

Six hours of agitprop might have made him happier – but this will be seen by and will move and make think far more people.

If it does not directly ask questions of the viewer, it is good enough to leave you with questions. The most obvious here, is if you were in Solomon’s shoes, what would you do?

And with a regime that was quite happy to shoot children, how can one condemn an armed response – though the film is careful to stress that MK’s manifesto was absolutely clear about not targeting civilians and avoiding casualties.

This is a very good film. It doesn’t gloss over problems, but its core is Kalushi’s personal journey to becoming a hero of the struggle against apartheid. And the character’s evolution is delicately drawn and beautifully acted by Thabo Ramesti – the first South African actor to actually play an icon of that struggle on screen.

He’s given excellent support from the rest of the cast, including Thabo Malema as the unstable Mondy, Welile Nzuza as Tommy London and Pearl Thusi as Solomon’s girlfriend, Brenda Riviera.

No matter the darkness of the subject matter – this is a powerful reminder of the nature of apartheid – ultimately, it is also an uplifting piece of cinema.

If you get the chance to see it on the big screen, then do. But it should be available on disc in the future, together with a documentary that Dube is working on.

Posted by Amanda Kendal at 11:31 No comments: