For the last couple of years, a trip to Brighton has meant one non-working thing: a visit to The Salt Room for a top-class meal.

Many eateries could learn a great deal from this place – menus that change regularly to reflect the alchemical fusion of season and place are an unfailing incentive to revisit.

After arriving in time to watch a stunning sunset that saw the sky to the west slashed with red and the magical sight of a murmuration of starlings fluidly circling over the silhouetted skeleton of the West Pier, it was time to get ready for dinner.

There are occasions when I wonder when, why or how Britain lost its understanding of seasonality in food.

We have the ridiculousness of asparagus and strawberries all year round, and people have simply come to expect that, apparently little noticing what that means for actual taste.

In October, The Salt Room was named as the UK winner in the 2017 Seafood Restaurant of the Year competition, organized by Seafish and The Caterer.

The competition, in its third year, was launched to highlight creative use of seafood and businesses’ knowledge of often under-used species in all types of restaurants.

Such recognition could hardly be more deserved.

A number of times when visiting, I’ve plumped for a mackerel dish to start – a fish that is so often ignored, but is always impeccably fresh here and cooked superbly, with innovative accompaniments.

However, this time I began with pig’s head, salt-baked parsnip, plum and miso.

The pork was soft and flaky, sitting atop a fat slice of parsnip that had just enough bite. Half a plum added a hint of tartness and firmer texture, while plum purée continued the theme. The miso was a little thread of flavor below.

Tiny pieces of nut on the side had somehow been given a light texture that made them a divine nut popcorn. Simply gorgeous and absolutely full of warm autumnal flavours.

This was accompanied by a glass of Tandem Ars Nova from Spain – a combination of Tempranillo, Cabernet, Merlot – which continued the earthy themes.

Next up was a superb piece of hake, with cauliflower presented in a number of ways, with chanterelles and lightly pickled chestnuts – a dish that illustrates perfectly why The Salt Room picked up that award.

It was accompanied by a very pleasant Sancerre, Domaine de la Rossignole.

For dessert, a blackberry meringue ball that opened to reveal a quenelle of crème fraîche, with fresh blackberries, lemon curd and lemon thyme.

This was positively a symphony of richness, tartness and texture – incredible flavours. And yet again, totally in keeping with the season.

The Salt Room is not cheap – but you get what you pay for and given that, just a few doors down the road, a plate of frozen scampi, frozen chips and mushy peas with a soft drink costs over £12, real quality is bound to cost more.

Very helpfully, they have an excellent range of wines that are available by the glass.

So there you have it: once again, The Salt Rooms illustrates the joy of seasonal food, locally sourced and cooked flawlessly. That is why it has been named the top fish restaurant in the UK. And why I think it is only a matter of time before it wins yet more plaudits.

If you’re in Brighton do visit – but booking is essential.

Posted by Amanda Kendal at 10:24 No comments:

Follies is simply a bittersweet masterpiece 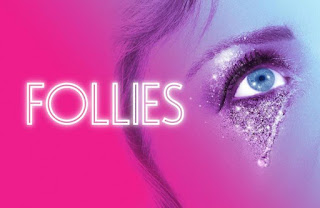 In the last 30 years, London’s West End has seen all too many musical follies and, in a previous life as a regular theatre reviewer, I’ve had the misfortune to see a few – Children of Eden and the execrable Robin, Prince of Sherwood spring all-too-rapidly to mind.

But 29 years ago, as a birthday present, I took my mother to the Shaftsbury Theatre to see the star-studded first London production of Stephen Sondheim’s Follies.

This introduction to Sondheim catapulted him into my pantheon of household gods, where he has remained ever since.

In the years since, A Little Night Music introduced The Other Half to his work – and to the idea that the musical theatre might not be totally naff after all.

But as the clock ticked down to my visit to the National Theatre’s revival of Follies, it is hard to describe the excitement that was mixed with slight trepidation at the fear that it might prove a disappointment.

Pared back to the original one-act version and with the overly optimistic 1987 ending ditched, it is better than ever.

James Goldman’s book has often been criticised as lacking much of a story. He continued revising it until his death and it’s noted that, of the relatively limited number of productions that there have been, no two are the same. For that 1987 London production, for instance, Sondheim wrote two replacement songs on the basis of the casting – Diana Rigg not being a dancer was the reason behind one of these.

Certainly there’s little story, but within the context of this work, that actually helps.

The hook on which Follies hangs is a party that is being thrown in a decrepit old Broadway theatre that’s about to be demolished. In the interwar years, it had played host to the Weismann Follies (based on the Ziegfeld Follies) and the guests on this final night are mainly former showgirls.

The two central former chorines, Sally and Phyllis, had been good friends, but with WWII they had drifted apart, marrying Buddy and Ben respectively – friends who had courted them when they were on stage. 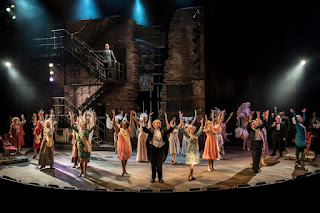 But neither couple is happy, with Sally having spent years nursing a flame for Ben that threatens to consume her.

At the theatre once more, as the ghosts of their young selves mill around them, the tensions come to a head.

So, that’s the ‘plot’. In which case, how does the show as a whole  overcome such a slender storyline to be such a masterpiece?

Simply because, in removing any distraction of a more complex plot, it becomes a meditation on age, regret, missed opportunities, lost dreams, middle-aged cynicism and more.

And this is also why we’re drawn to the characters and why Follies demands such a top-notch cast.

Here, Dominic Cooke has given each present-day character a ghost – not just the central two couples – and it gives greater emphasis to this sense of being haunted by our pasts.

But of course the other thing that makes this such a masterpiece is the music. There are essentially two scores: the first features the numbers Sondheim wrote for the women to sing, reprising their glory days.

They are fabulous pastiches of various composers’ styles – pastiche, but never, ever parody – and Sondheim’s genius shines through in both music and lyrics. There are several showstoppers here.

Stella’s Who’s That Woman, with most of the other women, is one. Hattie’s Broadway Baby another and, of course, Carlotta’s I’m Still Here, given further poignancy in this production as the character starts singing it to various other party guests, almost as amusing anecdote, before they leave her and she is left to finish it alone, more brittle than ever.

But for me, the goosebumps really come as the elderly Heidi sings her Leharesque old hit, One More Kiss. Her voice quakes, but is then joined to the crystal clear coloratura of her younger self. It’s enough to make the eyes prick even thinking about it.

The second score is the book songs – classic Sondheim numbers such as Losing My Mind.

As the show moves to it’s finale, the differences between these two scores blur a little.

Follies, quite simply, leaves most other musical theatre mired in Earthbound mud as it soars above. 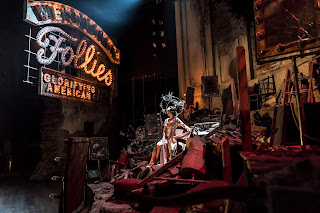 Cooke’s direction is superb, as is Vicki Mortimer’s design.

The cast is flawless. Staunton as Sally does, as always these days, hit the heights. But this is no solo piece. Janie Dee is a wonderfully acerbic Phyllis, Philip Quast is excellent as a man realising that his life is utterly lacking in any depth and Peter Forbes is every bit his equal as the confused and sad Buddy.

It seems almost churlish not simply to reel off the rest of the cast. But particular standouts from the rest of what is, in so many ways, an ensemble, include Di Botcher as Hattie, Tracie Bennett as Carlotta and Dawn Hope as Stella.

And absolutely not forgetting operatic soprano Josephine Barstow – who has worked with the likes of Herbert von Karajan – as Heidi, with Alison Langer as her younger self.

The orchestra, under Nigel Lilley, is also excellent.

And if you want one final indicator of just how good this is – I’ve managed to get tickets to see it once again.

If you can’t make it to the theatre – it’s on until 3 January – then there is a live cinema screening next week, on 16 November; find your nearest venue here. I simply cannot recommend this enough.