I live in a very small flat – with one Other Half and three cats – and this really is the main space that I have in which to create art. It’s essentially why I aim to produce original, small art for small homes – I know what living in a small space actually means!

The roll of felt is used as my background because it absorbs the light rather than reflecting it back, as black card does, for instance, and I like painting modern subjects in a way that nods toward a more classical look. I love Rembrandt’s dramatic use of light and dark for a reason.

I do, however, have a plastic crate in which I keep basics with which I can create still life works. After seeing Matisse in the Studio at the Royal Academy last year, I realised that I was doing what he had done, collecting bits and pieces and then using them in photos, paintings or drawings.

For that reason, I call it my Matisse Box, because it echoes how one of my personal household gods carried ceramics and fabrics and more around with him to set dress paintings. Indeed, it inspired me to put these odds and ends together and to collect more.

This is a time-lapse of creating a still life for a painting.

The resulting painting hasn’t been done yet, but when it has been, it – together with others – will be available to buy at www.etsy.com/uk/shop/SmARTartByAmanda.
Posted by Amanda Kendal at 18:40 No comments:

Anyone dissing The Grinch can do one 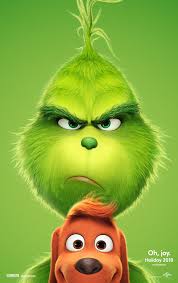 That should be a recommendation.

It’s a children’s story. It’s a film for small people. The OH and I went because we – okay, I in particular – love Illumination. I spent some periods of the film simply revelling in that studio’s style of animation. envious of the digital vision.

It’s Scrooge for children, so no spoilers are needed. And its anti-consumerist message – true to Dr Seuss’s 1950s original book – should be welcomed by anyone with a brain.

It dodges sentimentality, but Scott Mosier and Yarrow Cheney’s film has plenty of heart and more than a few laughs.

Beautifully animated, it also makes great use of music (including original work by Danny Elfman) and has an excellent voice cast, topped by Benedict Cumberbatch as the Grinch himself, with Pharrell Williams as the narrator and Her Magnificence Angela Lansbury as the mayor.

Oh. And it is preceded by a new Minions short.

I’m happy. If you’re not happy with that, then tough.

The Grinch is now on general release.

Posted by Amanda Kendal at 21:44 No comments: