Nessan dorma hits the heights in this Turandot revival 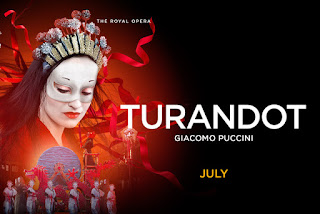 Bread and circuses for the masses have overlapped with the cruelty of a regime more than once down the centuries, and they meet head on in Puccini’s swansong, Turandot, which is currently on revival at the Royal Opera House, London.

The curtain rises on Peking, where a mandarin is announcing that, as per the law, the Prince of Persia is to be beheaded at moonrise after failing to answer three riddles in an attempt to win the hand of the Princess Turandot.

When excited crowds are repelled by guards, they knock over a blind man in the process. His slave, Luì, calls for help. Seeing the incident, a young man recognises his father, the deposed king of Tartary.

Later, he sets eyes on Turandot and, instantly in love, decides to take the riddle challenge.

He solves all three riddles, but the princess says she will not marry him, saying she must stay pure.

The prince sets her a challenge: if she can guess his name by the next morning, she can have him executed – and thus escape the marriage.

She has attempts made to torture the name from Luì, who is in love with the prince, but the slave girl grabs a knife and kills herself rather than give up his name.

Turandot is astonished by these events, while the bloodthirsty crowd, now shamed, quietly follows Luì’s body out.

The prince reproaches Turandot for her cruelty, then kisses her. The kiss starts to thaw the ice princess and he gives her his name – Calaf – placing his life in her hands.

She calls everyone together – including her father the emperor – and says she has his name: “it’s love!”

Left unfinished at the time of the composer’s death in 1924 – the first two acts were complete, together with substantial amounts of the third – it was finished by Franco Alfano and first performed in 1926 at La Scala.

Like more than one of Puccini’s previous works, it has been viewed negatively ever since.

In his 1956 book, Opera as Drama, critic and musicologist Joseph Kerman wrote that “dramatically it is a good deal more depraved” [then Tosca], although Sir Thomas Beecham (who had met the composer and conducted his works) once observed that anything Kerman said about Puccini could “safely be ignored”.

Almost 90 years later, in 2013, Michael Tanner in the Spectator called it “an irredeemable work, a terrible end to a career”.

Many complaints revolve around the rush from Luì’s sacrifice to Calaf’s rough kissing to Turandot’s thawing, but since this part of the work was Alfano’s, it’s easier to see why problems might occur.

The Royal Opera House’s current production – first seen in 1984 – helps to deal with this by having Luì’s cortege return to the stage to dampen the celebratory mood at the end.

When discussing La traviata a couple of weeks ago, I suggested that, while honour as a concept might be considered less of an issue in Western society than it once was, as long as ‘honour’ crimes exist (and they do so across a variety of cultural and religious traditions), then the core themes of Verdi’s work remain salient.

I’d add that if ‘honour’ is not a major theme in UK culture today, we still have serious class and other divides that carry with them similar attitudes.

The overarching point is that these operas remain so alive and so popular because, like Shakespeare, they deal with universal themes of the human condition.

Over on Twitter a year or so ago, it was suggested to me that, however thin or preposterous the plots may seem, opera can convey an underlying truth.

It’s a complex truth – and partly emotional, since we respond to music in a particular way. Here, when Calaf sings that iconic aria, Nessun dorma, the eyes are pricked, the spine tingled and the skin goosebumped.

In this revival, Roberto Alagna gave it everything required to produce just such a response, in a performance that also managed to find some sense of real emotion in a difficult character.

As a slight aside, how I wish audiences would not burst into applause so quickly after a big aria like Nessun dorma: leave it a moment to bask in the magic. And magic it is – one of those moments that really screams out how great opera can be.

Lisa Lindstrom has returned to Covent Garden to play Turandot, her mannered, choreographed movements and the purity of her voice perfect for the ice princess so determined to remain aloof.

Yet both these stars are usurped by Aleksandra Kurzak as Luì, whose soprano soars in her arias and who acts with a poignant mix of fragility and sacrificial strength.

Brindley Sherratt as Timur (Calaf’s blind and aged father), Leon Košavić, Samuel Sakker and David Junghoon Kim as ministers Ping, Pang and Pong respectively, and the Royal Opera Chorus all deserve special mention, while the use of dance certainly adds to the production.

Dan Ettinger conducts the Orchestra of the Royal Opera House, which does sometimes seem to be competing with the singers.

Having originally seen this production on television a couple of years ago, I knew I liked Andrei Serban’s staging, but seeing it live really opens everything up and I appreciated it even more. It manages to be both claustrophobic and yet epic, which suits the tensions inherent in the piece perfectly. Sally Jacobs’s costumes are equally spectacular.

Puccini’s music is fascinating – not least as this is his most tonally-adventurous score, peppered with Chinese music to give it an element of authenticity.

The whole is thoroughly marvelous – and whatever you think about the plot, Nessun dorma live, sung as well as here, will live with you for a very, very long time.

And there are free YouTube and outdoor BP screenings this Friday night. So to find out more, visit the Royal Opera House site here. Make sure you have hankies.

Posted by Amanda Kendal at 14:44 No comments:

Going bananas for Despicable Me 3 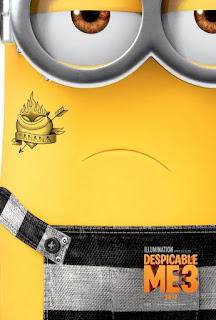 It was almost exactly two years ago that The Other Half and I ventured back into an actual cinema for the first time in 16 years.

There were all sorts of reasons why that situation had occurred, but the 2015 film that finally tickled my fancy was … Minions.

A late adopter, I had only really ‘discovered’ the yellow critters via social media, but loved the film –also my first 3D experience – and, since then, have also seen Despicable Me and its first sequel on numerous occasions.

Thus, when Despicable Me 3 opened on Friday night, I was there, 3D glasses in hand, to sample a new outing for Gru, Lucy, the girls – and of course, the minions.

I admit to wondering if they could keep the franchise going, but any trepidation didn’t last beyond the fart gags at the start of the opening titles.

There are several plots here and the film weaves between them with apparent abandon, but that helps to ensure that it all keeps moving along at a merry old pace.

In no particular order, we have Gru and Lucy having to face child TV star turned real life villain Balthazar Bratt; the minions getting jailed en masse; Gru discovering he has a twin brother; the small matter of whether Lucy can really bond with Margo, the oldest of the girls; and Agnes and Edith searching for a unicorn.

Pierre Coffin and the Illumination team have pulled it off again in thoroughly enjoyable fashion.

There is no shortage of laughs – and there are plenty of references for adult viewers, from a swipe at Gérard Depardieu, to a soundtrack stacked with ’80s hits.

The minions have plenty to do, allowing for much slapstick and generally delightful daftness, and it’s to the creative team’s credits that they haven’t simply recycled the same jokes about bananas, for instance.

Miranda Cosgrove gets more to do here as the character of Margo develops – there are some nice scenes between her and Lucy – and Steve Coogan pops up as a couple of characters.

There’s also a little sprinkling of Julie dust, as Julie Andrews reprises her role as Gru’s mother, while Coffin and Chris Renaud voice the minions – including in an absolutely wonderful take on Gilbert and Sullivan’s I Am the Very Model of a Modern Major-General from The Pirates of Penzance, which can be found here as a singing challenge.

Despicable it might be – but downright entertaining it certainly is.

Posted by Amanda Kendal at 15:12 No comments: