It's deconstruction Jacques, but not as we know it 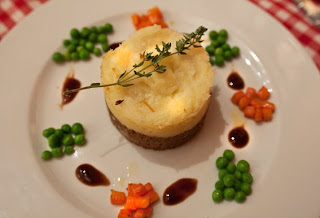 So: it's the middle of the week. There's the remains of a leg of lamb sitting in the fridge, but we've already had a post-roast dinner of cold cuts, so how best to use some more of the meat?

The obvious thing was a shepherd's pie.

But an intervention of sorts had come via copy of Food Presenting Secrets by Cara Hobday and Jo Denbury, a copy of which had landed only a couple of days ago.

One of the first ideas I'd noticed was a 'tower' of puréed potato. In essence, the potato is cooked as normal, then put through the ricer and beaten into smooth perfection with butter and good double cream, but then it's packed into buttered rings on a parchment-lined baking tray, before being cooked further in the oven at 200˚C for 20 minutes.

So that was already in mind.

Two small problems had struck me when I'd been making cottage or shepherd's pies in the last few months: first, that the diced carrot needed pre-cooking to get the right texture. Second, that the most natural dish I had to cook it in always encouraged me to make too much.

Slowly but surely, an idea dawned. I've also noticed that using a ring for presentation purposes is actually quite a good way of helping limit portion size.

Put two and two together and what do you get?

I started toying with the idea of a deconstructed shepherd's pie, but after such a thought had flittered through my mind, hot on its heels came a sort of: 'err, exactly what is a deconstructed dish?'

A trendy phrase, but what does it actually mean?

Simply, it's a dish where the ingredients have been separated out - the rather obvious deconstruction bit - but the way it's reconstructed is just as important, while the flavours should still give you a sense of the traditional version.

First, some of the remaining lamb from Sunday's roast was minced. An onion was chopped finely and softened in a little rapeseed oil, before the mince was added and cooking continued at a low heat.

Because it had already been cooked, the meat was dry. I added a little water to moisten, plus a shake of HP sauce.

In the meantime, three potatoes were peeled and boiled, while a carrot was also peeled, cut into slices just over half a centimetre thick and cooked in salted water for around eight minutes - until the point of a sharp knife entered easily. These were then rinsed under cold water and drained.

The oven was pre-heated and my largest rings buttered and placed on a prepared tray. The cooled meat mixture was shared between the rings and packed down, before the potato followed. It was dotted with butter and sprinkled with fleur de sel before being popped into the oven.

Next up, butter is melted gently in a pan and the carrot slices, which have now been cut into small dice, are finished off, with a touch of seasoning. It takes around five minutes.

A small amount of peas were also boiled.

The final question was gravy/sauce. I decided to try a little experiment and thinned down a small amount of HP sauce with some dipping Balsamico. Finding it tasted okay, I made up a bit more.

Plating up was easy. A palate knife was perfect to lift the rings from baking tray to plate. The gravy was easy to dot around - plenty of space on a big plate - and the carrot and peas fitted in easily after that, with a sprig of thyme to top it all off.

It looked great, but it tasted good too. The meat was still a little dry, but it was full of flavour. The potato worked well. The carrot was much better cooked than in my previous, traditional versions. The gravy worked well and added a bit of necessary punch.

Perhaps surprisingly, it didn't take any longer than the usual version. In this case, for instance, I didn't need to pre-cook the peas.

And it was certainly good on the eye!

It might not be deconstructionism as Derrida meant it, but it wasn't bad at all for a first effort.
Posted by Amanda Kendal at 22:40