Never mind the football, what about the hair? 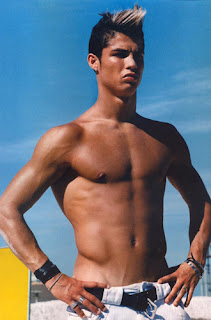 In the first – and possibly even the last – of an occasional series about the European Championships in Poland and Ukraine, it seems appropriate to cast an eye over what we have learned from the first round of matches.

Match one gave us co-hosts Poland against 2004 winners Greece.

The Greeks are still fondly remembered for that unlikely triumph, masterminded by German Otto Rehhagel – not least because the Portuguese side that they beat in the final in Lisbon included Christiano Ronaldo, who may have talent by the skip load, but is also a narcissistic little twonk.

The Greeks were poor in the first half, but looked better in the second. The Poles don’t look much better.

Match two, from the same group, pitted Russia versus the Czech Republic.

I was there in ’96 when the latter made it to the final. They won’t be going anywhere near that far this time – although it remains to be seen whether Russia will look this good against much better opposition.

Time will tell. You’d expect them to go through – and then it’s a guessing game for the second berth.

Saturday came – and it was time for the ‘Group of Death’.

There’s always a Group of Death. It seems to be a law of nature.

This one kicked off with Netherlands facing Denmark.

What has happened to the Dutch? Yes, yes – I know they always have had the ability to implode at tournaments as player power took its toll, but what about the football?

Bert van Marwijk needs to go. This is the man who sent his players into the World Cup final against Spain in 2010 with but one tactic – spoil the Spanish game by being dirty. He shouldn’t be still coaching them.

It looked pretty to start with. But for all the brilliance of Wesley Scheijder and the obvious prowess of Robin van Persie and Arjen Robben, both strikers looked out of sorts and could never capitalise on Scheijder’s work.

The Danish were, by contrast, a tight unit that showed values that Rehhagel would admire, and they fully deserved the win.

The Dutch face a seriously uphill task now. They've got Germany next – and the three-times winners shook off a slightly shaky start against Portugal to claim all the points.

A young German side had to be patient to defeat a Portugal team that, for all that it includes some top-class players, had decided to park the damned bus.

Parking the bus is boring at far less elevated levels than this. In the English Premier League, for instance, it's what you expect from the likes of Bolton and Everton and Wolves. In the case of two of those, it was a tactic that played a large part in their relegation last month.

But this was not the biggest concern for Portugese skipper Ronaldo, who actually went in at half time and repaired his hair do, applying the old product to get that impressive spiky look again.

How delicious it would be if Portugal don’t manage to get beyond the group stages – just to see the Ronaldo lip wobble.

I can see Denmark going through with Germany from this group.

Next up, in group C, was Spain v Italy.

An absolutely fascinating game – for goodness sake, Vicente del Bosque, inspired utterly by Barcelona, started with no striker on the park, but six midfielders instead.

Admittedly, when your front three in such an arrangement are David Silva, Cesc Fabregas and Anréas Iniesta, the only adequate response is drooling.

And nothing could have proved del Bosque’s decision right than the late arrival of Fernando Torres on the pitch, ready to show the world that, right now, he couldn’t hit the front of the Palacio Real de Madrid from five metres.

Spain, all Catalan tiki-taka to Italy’s greater pragmatism (780 passes to the Azzurri’s 426 – completion rate 88% to 76%) will need to find a cutting edge if they’re to retain their title – and become the first team ever to win three successive international tournaments.

Italy surprised – even though Mario Balotelli contrived to miss the chances that would have given Italy a win that, while unexpected, would have hardly been unfair.

In the group’s other game, Croatia took on Ireland  – and oh, how the Irish must long for the days of St Jackie O’Charlton.

Ireland were poor – although they looked better when they took a couple of their more experienced players off and gave younger players a shot.

But this leaves us not knowing how good Croatia are – although it looks like a team that has taken on board at least some of the philosophy shown by their coach, Slaven Bilic, when a player himself.
In other words, be as dirty as possible.

So, Greece poor; Ireland poor; Germany stable; was this Euro 2012 – or the eurozone?

And then came England v France, complete with the sort of hyperbolic nonsense that we have, thus far, been generally spared.

“Agincourt, Waterloo and now Donetsk!” shrilled the ITV commentator, because football is just war by means of a spherical object.

It was almost enough to make a sane viewer long for Mark Lawrenson again. Almost.

A cagey affair in many ways, Roy Hodgson’s new England did decently, with a headed goal from Joleon Lescott being cancelled out by a super shot from Samir Nasri – making it a bit of an all-Manchester City affair.

England looked far from spectacular, but they did appear to be a unit – and new boys Danny Welbeck and Alex Oxlade-Chamberlain were real bright spots.

France showed greater artistry – and Nasri was excellent – but they couldn’t turn their dominance in possession into a winner.

And finally, Andriy Shevchenko may be past his best at 35, but two headed goals in six minutes sent co-hosts Ukraine into ecstasy, as they came from behind to beat Sweden 2-1.

There's still everything to play for, but you’d probably go for England and France progressing from the group stage.
Posted by Amanda Kendal at 09:04