They all came to Elne 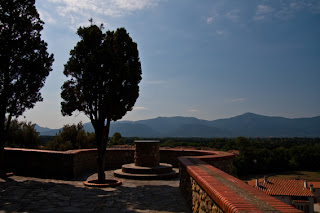 In this part of the world, they talk of having 27 centuries worth of history.

Now most places have lengthy histories, but if that sounds like an exaggeration, it isn’t.

And nothing could have made that clearer than a board charting those centuries in timeline form, which hangs in a small room off the cloister at the Cathédrale in Elne.

Originally under the control of the Ibéres, the town was first known as Pyréne, then Illibéris, during which time, in 218 BCE, Hannibal dropped in for a break after crossing the Pyrenees.

The Romans liked it so much that they came, saw, conquered and stayed around for a while, from 118 BCE to 414 CE, during which Elne became Castrum Helenae.

Then the Visigoths came, replaced by the Arabs for around 70 years, and followed by the Carolingians for just over a century.

By the time the Catalans took over in 873, it was Elna. Then the French popped over in 1473 before the Spanish arrived in 1494, to be replaced by the French again in 1642 when they realised they rather liked the place and would keep it. And so the town became Elne. 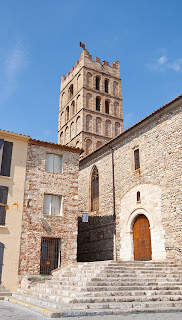 It was the bishopric of Roussillon from the 6th century, but as nearby Perpignan prospered, Elne declined. In the late Middle Ages, the counts of Roussillon moved their seat there, with a papal bull seeing the Episcopal seat follow in 1601.

The Cathédrale Sainte-Eulalie-et-Sainte-Julie was founded in 1060 and consecrated nine years later, a lasting monument to the Roman style of architecture, with its two towers soaring above the town from the old ville haute.

The cloister is one of the finest examples of the Roman style – and now, centuries later, is one of the major drawing points for tourists, as Elne slowly starts to benefit from the rise in tourism – and the development of an area that, not that long ago, was considered the poor man of France.

And that cloister is astonishing.

It isn’t exaggerating to say that one could almost sense monks walking around, their habits rustling almost imperceptibly. The more imaginative could even be forgiven for thinking they hear the sound of chant on the breeze that brushes the lavender in the quadrangle. 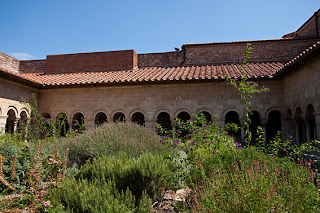 The cloister developed from the Greek and Roman peristyle, or open porch, frequently surrounding an internal garden, and here, the colonnaded shade and the Mediterranean sun present sharp contrasts.

The carvings that decorate columns and walls run from the Romanesque to the Gothic, and besides showing Biblical scenes, also include flowers and patterns, together with mythical creatures, including griffins and mermaids.

The church itself is interesting too, with its Romanesque vaulted ceiling – rounded, not rising to a point. There are the usual side chapels and statues and candles, but nothing quite to equal the cloister.

We had taken the bus from to Elne and wandered upward, into the haute ville, the oldest and highest parts of the town, which surround the Cathédrale.

This small area offers extraordinary views across the plain to the Pyrenees as they slope gently down to the sea at Collioure, and to Perpignan and the Corbières hills in the other direction.

There were geographic advantages to Elne as a point from which to rule.

Next to the tourist information office was an old building that housed the gallery and glass-blowing workshop for Sylvain Magney and Veronique Carvalho.

Heaven alone knows what the heat would have been like if there had been any glass being blown when we were there, but the artist was having a day’s rest.

The glass was lovely. I came away with earrings and a pendant, in a sea green, with bubbles in them, like air rising to the surface. Unique pieces.

Artisanal crafts are a part of Elne’s revival and, a short while later, as we ambled among to apparent jumble of Roman walls and later housing, we found a little artists’ enclave with a café serving regional items – even up to Catalan cola.

As we sat amongst the palms, we saw a little cat. A sweet-faced thing, with a touch of mange and very dodgy back legs, one of the craftsmen (he makes harps) told us that this was Zazou.

At 14, she had been abandoned by her owner for being ‘too old’. Apologising for his language, he said how disgusting he thought this was. The artists and craftsmen and women in the café were all making sure that she had food and water.

“She’s not ready to die yet,” he added, looking fondly in her direction, as she lay on the step outside his workshop.

After the Cathédrale, we headed for lunch, and found ourselves at the very nearby Au Remp’Arts. 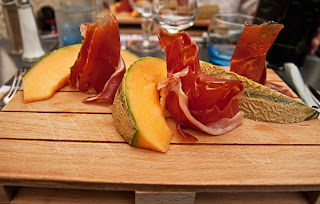 There we both had jambon and melon for a starter; vast portions of sweet, ripe fruit and glorious ham, served on little wooden pallets.

There’s a reason that this is such a classic combination: with quality ingredients, it’s superb.

The Other Half opted for a steak to follow, while I hunted the menu for the fish.

Spotting something called ‘cabillaud’, the fact that it was grilled and coming with aioli suggested that this was in the right area.

Indeed, it was cod. And very nicely done too, arriving on a bed of garlicky potato purée, with a piece of crisped skin and two chives as a garnish, and piles of a sort of julienned version of ratatouille on either side. 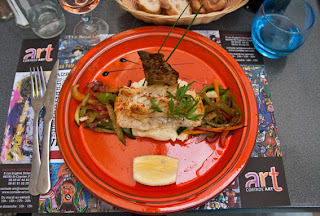 With a three-course deal for €26, desserts were a bit of a letdown. The Other Half’s crema catalana was closer to scrambled egg than it should have been – Hurrah! I’m not the only one who can scramble a custard!

My peach melba was simply chopped peach with a little vanilla ice cream and a pile of chantilly cream on top.

But after two excellent courses, at such a reasonable price, it would have been churlish to complain.

We ambled some more as clouds threatened a downpour, and eventually found our way, via a circuit, back to a gallery that contained a number of works by local artist, Ètienne Terrus.

The great advantage of such galleries, as with individual exhibitions of a single artist, is that get a sense of that artist’s journey.

And Terrus had certainly been on a massive journey, artistically speaking.

Looking at works from the late 19th century, there was nothing to suggest what would follow.

Technically excellent, but two still lives (of oysters and of a fish with pan) were reminiscent of Gustave Courbet, in terms of the light and use of colour.

But then Terrus discovered Impressionism and, with it, a vastly increased palette of colour.

And where his work went from there sees him now regarded as a precursor to the Fauves – the likes of Matisse (a friend) and Derain and Dufy, many of whom spent much time in Collioure, with which they and their art movement remain inextricably linked.

After a combination of religion, food and art, we made our way back to Collioure, via the hubbub of Argèles sur Mer (great beaches, town built up as the archetypal resort).

It had been a fascinating day.