After a 12-day stint of work, with those trips to Sheffield and Scunthorpe forming part of that, this weekend could hardly have been  more welcome.

And what better way to start things off, after a long, restful sleep, than to find blue skies above and actual sun visible in the firmament.

It was, indeed, the sort of weather that made you feel that spring is not too far away – and to put a spring into your step.

Broadway Market was its usual self by the time I arrived, bustle beginning to build to the levels we've come to expect, but everyone seemed to be feeling the benefit of gloom lifted.

The now-regulation Saturday breakfast of a sausage roll from one of the stalls – a Cumberland sausage in real pastry – was enjoyed standing to one side, a confetti of crumbs tumbling to the ground.

Chats with Matthew and Trevor were appreciated during the shopping, and another at La Bouche with Arno, who was sporting a rather magnificent beret.

Shopping done and packed away, a stroll through the park followed, newly-planted trees bearing evidence to the belief of the council gardeners that the season is changing. There was even some warmth from the sun.

Back at home, The Other Half was deliberating hanging a wash outside for a while, while the cats were begging to get out too, insisting that we had no decent excuses, because they could quite clearly see that it wasn’t wet or grey or snowy any more.

While they patrolled their territory, I went looking around mine.

The damp and gloom had halted my autumnal gardening exploits, yet the patch of soil that I had already sifted, in a bed that's part of the car park, has seen less weeds growing than that I hadn’t got to.

A valuable little lesson – quite obvious when you think about it, but also an indicator of just how unnaturally mild this winter has been. 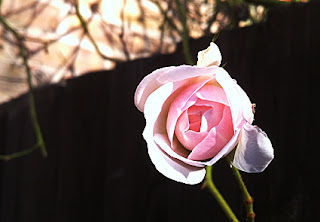 Winter jasmine offered seasonal colour, while a neat, pale pink rose on a bush growing out of one of the other flats' gardens offered a rather more unseasonal sight.

The pyracantha shows new growth. The chives and garlic are reviving, as too are the sorrel and mint.

Crocuses and other bulbs are well on the way. The only bulbs that seem reticent are the snowdrops.

Back inside and time to use up a celeriac that’s been sitting around for a fortnight.

Two small onions were peeled, sliced and softened in butter, joined by a sliced stick of celery and then the drained celeriac, which had been cut up and was resting in a bowl of acidulated water.

To that was added some stock: when I need a stock cube, I use Kallo’s Just Bouillon – a rare one, in that it doesn’t include palm oil, the harvesting of which is damaging orangutan habitats. 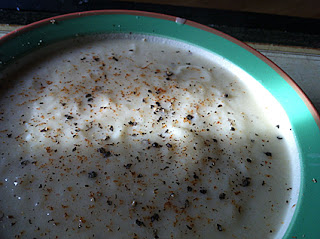 And then it was left to simmer away while I watched the first half of Manchester City’s FA Cup fourth-round tie at Stoke.

At the break, it was given a bit of a blitzing with the hand blender, before having a little cream added to finish it.

And then it was served with plenty of black pepper and a grating of nutmeg.

And jolly pleasing it was too: soothing and warming and gentle: perfect for such an afternoon.

The invigorated mood was not harmed when City went through, thanks to a late goal from the wonderful Pablo Zabaleta; goodness, how many right-backs could have finished so well? Zabman is total class.

And then a feeling that I wanted to bake. But what? I’d made no plans.

However, there was enough in the cupboards to make a version of my mother’s ginger sponge.

The recipe is in an old notebook, precisely copied down some 30 years ago, in imperial measurements.

I have made one or two adjustments over the years – not least substituting butter for the marg my mother used: I remember the pale yellow and white stripes of Stork packets.

Given what else was available, I also took a piece of stem ginger and chopped it finely, adding it at the end of mixing.

My mother also used to add 75ml of milk, but I don’t think it needs it. She also just used ordinary sugar.

It’s not a light sponge, like a Victoria – but with all the Golden Syrup used, it never could be. What it has is density and bags of flavour.

Make sure you use a good-quality ground ginger. The stem ginger really gives it an extra kick.

So, melt 200g Golden Syrup, 75g of unsalted butter and 50g of unrefined demerara and melt gently together.

In the meantime, sift 200g of self-raising flour, add a pinch of salt and two heaped teaspoons of ground ginger.

Into this, add one beaten egg, and then add the melted syrup/sugar/butter and beat in.

This was where I added the stem ginger, before decanting the lot into a lined baking tin.

To check it’s cooked, press a skewer into the centre and, if it comes away clean, the cake is done. 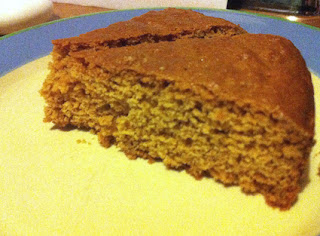 Remove from your tin onto a rack and allow to cool.

Maybe it isn’t the most sophisticated piece of baking, but it was readily doable from what I had in and, in that, answered a need.

That there’s less than half left attests to it packing a punch of warming ginger.

And then a Poirot stack on the TV, followed by haggis from Andy, with tatties and, if not neeps, then crushed swede, carrot and parsnip, before top-notch animation in Robots – imagine, a Hollywood film that, in effect, is damning of the beauty/cosmetic surgery industry!

All in all, was that perhaps close to being a perfect day?