Through the Looking Glass: we're not really in wonderland any more 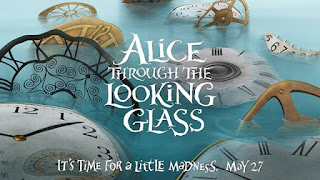 Alice In Wonderland, Tim Burton’s 2010 take on Lewis Carroll’s 19th-century surreal classic, was generally given the thumbs down by the critics, but a global box office take of $1.025bm for Disney, for an outlay of around $200m, ensured that it was a success – and that a sequel was likely.

Now, in Alice Through the Looking Glass, Burton has returned to Carroll. This time, though, he’s one of the producers, with the directing reins handed to James Bobin and Linda Woolverton returning for scriptwriting duties.

The first film was messy, but still fun.

This is messier still and has been roundly trashed by the critics, but still has merits – although they’re perhaps harder to find.

Like the first film, it’s “based on” Carroll’s characters, with Alice as an adult.

It opens three years after the last film, with Alice – now the captain of her late father’s ship – steering it away from Chinese pirates and back home to Blighty after a three-year voyage.

This fantastic escape gives time to re-establish that she has lost none of her feistiness or bravery, and that ‘impossible’ remains, for Alice, a dirty word.

But once back at home, all is not well, and she finds herself plunged back into a fight to retain her chance for adventure and wonder against conventional expectations and pressures.


Just in time, Absolem the butterfly (formerly the caterpillar), reappears and leads her to the mirror that offers a door back to Wonderland.


And once there, Alice discovers that the Hatter is dying – and that only she can help.


Absolem is, once again, voiced by Alan Rickman – his last performance before his untimely death at the beginning of this year, and it brings a lump to the throat to hear his voice.


At the heart of this film is the idea of time – you can’t get it back – and how you must live every day to its fullest extent and make sure you never live to regret any bad relationships with your loved ones.


And if that sounds clunky, it’s because it is: twee, sentimental and hamfisted.


Some of it – perhaps especially not being able to tamper with time and the dangers if you do – are laid on with a JCB: and for goodness sake, do the writers think none of us have ever seen Star Trek?


I love the characters and I loved how the first film developed them. But even though it’s good to see so many of these cinematic friends again, it’s hard to care much about what happens to them – especially as the bulk of the film drags.


We get backplots aplenty, explaining how the Red Queen became the nasty character we’re familiar with (and how she got her big head) and how the Hatter became, well ... the Hatter.


And there is Time himself, in the persona of Sacha Baron Cohen, trying to prevent Alice from breaking time itself.


Now, as I said, there are compensations.


In the last quarter, it eventually gains real pace and a sense of tension and even passion. Finally, you are drawn into caring what happens. But it takes a long, long time.


If there is a sense that Johnny Depp is pretty much treading water as the Hatter, Mia Wasikowska turns in another enjoyable and solid (if not Earth-shattering) performance as Alice.


Anne Hathaway’s White Queen is as vague as before, but as we start to understand the reasons for the relationship breakdown between her and her sister, the Red Queen, the contrast becomes more understandable.


As for the Red Queen, Helena Bonham Carter returns and adds some much-needed energy to proceedings.


Baron Cohen, once over an initial bit of clowning, is actually very good.


Incidentally, how many times in mainstream Western cinema has a scene been played between actors with three names each – Helena Bonham Carter and Sacha Baron Cohen?

We get a brief cameo from Sherlock’s Moriarty, Andrew Scott, who seems to have cast in order to bring that character to this film.


And I did like Wilkins, Time’s long-suffering, robotic butler – played by Muppets puppeteer Matt Vogel, with Toby Jones voicing, although why a character with such an English name should look and sound German is a mystery.


The biggest compensation is that it is visually superb – dazzling in places, not least in the time-travel shots and in Time’s castle, where there is also a rich, blue and gold palette that brings to mind Martin Scorsese’s Hugo.


And the visuals are not harmed by being viewed in 3D: having only seen my first 3D film 10 months ago, I’m certainly getting value from those glasses!


Alice Through the Looking Glass is ultimately disappointing. In some ways, having Burton’s name attached actually adds to the disappointment, because we expect such great things from him – and for a reason. But then again, whatever you may read or hear from the critics, it isn't some sort of cinematic version of the Titanic either.

And like its predecessor, it’s probably a fair prediction to say that it’s hardly likely to be flop.