Getting down in Maigret's Paris


The Friend of Madame Maigret by Georges Simenon 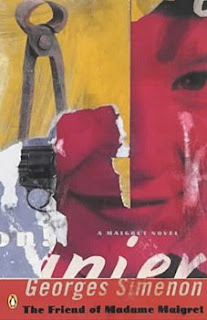 While Maigret is becoming increasingly frustrated at his attempts to prove that a brutal murder has been committed at a local bookbinder prove fruitless Madame Maigret has a strange encounter with a woman and a child while she waits for a dental appointment.

Surely they couldn’t be connected?

I love the Maigret novels. Pithily written with a wonderful central character – Maigret lives in a twilight world, somewhere between the law and crime. He has more empathy with the men (and women) he hunts down than with the stiff suits who fill high offices in the judicial system; he’s happier in the seedier streets of Paris than in any smart and glamorous settings.

And then, of course, there is that second major character in the novels – Paris itself. A city that has been Baron Haussmanned, certainly, but not sanitised out of all recognition. Les Halles, for instance, appears as the ‘stomach of Paris’, before it was turned into a pretty dismal underground shopping centre.

And Maigret guides us through that colourful underbelly, sitting in little cafés, where he knows most of the prostitutes by name, mulling over cases as he stokes his pipe and sips a little cider.

When in that city, I find myself recognising names from Simenon’s books – and looking for areas that are mentioned. When I first tried calvados for the first time, it was in large part because it is featured in the novels.

And this volume, from 1949, is no exception. What it does also do, is give us a few more scenes with Madame Maigret, throwing a few stray hints our way about their relationship and her life.

Otherwise, this is as thickly plotted as ever – and just as much of a delight to read as one expects.

I’m now trawling ebay to build my collection – since most of his novels are shamefully out of print in English.
Posted by Amanda Kendal at 12:26