Simplicity and sensuality: a Paris match

You could be forgiven for thinking that French cuisine is a complicated beast – there are all those sauces, for starters.

But while some Gallic food might be on the complex side, a lot of it is pure simplicity. And simplicity demands quality.

A long weekend in Paris was the perfect opportunity to muse on this matter – and to follow up on my culinary experiences in Berlin in May.

There’s something quite special about boarding a train in the revamped St Pancras and being in Paris two and a quarter hours later. This is travel in a quite old-fashioned way; travel that’s enjoyable in itself – none of that soul-destroying sitting around in airports for hours. And when your train departs at 4.25pm, you journey in the knowledge that you’ll be able to dine in the French capital.

Which we did. At Septième Vin, a charming restaurant in the seventh arrondissement, which has become our place to stay when we’re visiting.

As we walked down the road toward the restaurant, the joint owner and maître d', recognised and welcomed us. If we had to wait a few minutes for a table, he made sure it was an easy wait, with glasses of kir on the house, plus a small plate of very good saucisson.

We’ve been very partial to rosé for the last year or so, and the choice of one from Provence or from the Languedoc was met with an: “Oh, the Languedoc!” that must have instantly revealed us as visitors to that region of the country too. 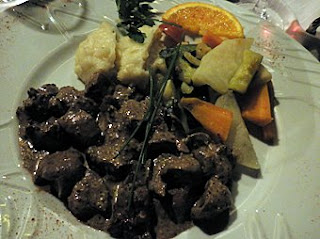 I had scallops with salad, which was very pleasant, followed by sautéd veal kidney with a mustard sauce – which was also very pleasant, although it could perhaps have done with being cooked slightly less. On the upside, it was served – surprisingly, given the season – with root vegetables, but very nice they were too. My appetite failed me at that point and I settled for a cognac (on the house) but no dessert.

And so to a little cultural diversion. It has crossed my mind, more than once, to wonder why scallops are known as Saint Jacques in France. But there we were, wandering around the Louvre’s section of early northern European painting on Sunday morning, when we noticed a scallop shell on the cap of a figure standing to the right of Jesus in a rather old picture. Sure enough, the figure, so the accompanying text explained, was Saint Jacques. The Other Half pointed out the link and I remembered that Jacques – or James – had been one of the fishermen who became disciples.

Now, I have no idea why a connection was made at some time between that particular disciple and the gorgeous little shellfish in question, but clearly it’s been around for years, and it’s probably fairly safe to assume that it’s behind the naming of the delicacy in France. 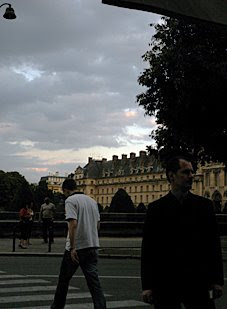 Satuday was an anniversary, so we ate at the rather smart Café de l’esplanade in the evening, outside and under a canopy, with a view across the road to Invalides, where Napoléon is entombed. It might have been al fresco (we didn’t eat inside during the entire trip), but that didn’t mean anything less than perfectly ironed tablecloth and napkins.

We had Kir Royals to start, and ordered a rather nice (if very pale) rosé from the Campaux vineyard in Provence.

I opted for haricot vert as a starter, and my plate duly arrived piled high with the fine beans, dressed delightfully in virgin oil and Balsamic vinegar. It was an object lesson in cooking vegetables – crisp yet perfectly cooked. And as with anything so strikingly simple, it’s absolutely crucial that the ingredients are top quality. 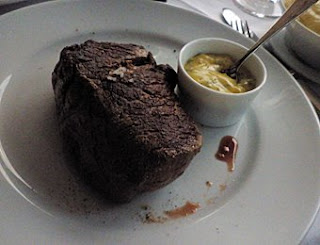 A chateau-briand followed, ordered au point, thus ensuring it was seared and little else. The knife might as well have been a hot one, slicing through butter, it was so tender. Again, you’ve got to have top-notch meat for this. And the sauce – a classic béarnaise, served in a tiny ramekin on the side – was a sensation, with fabulous tarragon coming through wonderfully (that was the most complex bit).

Both our meals were served with puréed potato on the side, creamed with oil and arriving in a bowl with a teaspoon of virgin oil in the centre. ‘Mere mashed potatoes’, I hear you cry. But honestly, it was gorgeous. 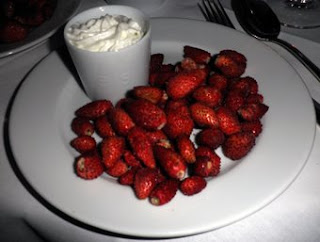 And we finished with a plate of tiny wild straw-berries, each hardly bigger than a finger tip but absolutely bursting with flavour. It seemed almost sacrilegious to dip them in the pot of Chantilly cream, but such reservations are there to be overcome.

Not that everything was as good. On the Sunday, we thought we’d amble down to a rather good restaurant called Le Bosquet, only to find it closed. Instead of sensibly turning back, we carried on walking in the direction of the Seine in a languorous manner.

Eventually, we found ourselves opposite a rather old-looking restaurant. Deciding that we should try somewhere new, we went and got ourselves a table.

I ordered foie gras and toast, followed by a brandade of salt cod. The Other Half ordered a French onion soup – rather forgetting that it is classically served with cheesy croutons. And he doesn’t like cheese.

We opted for a carafe of house rosé.

The foie gras was reasonable, the toast very basic. And so to the brandade. Okay, it’s not a local Paris dish, but salt cod is used all over the country. This is salt cod, pureed with olive oil and milk. Or it should be. Sometimes, it has potato added too.

This had flaked cod, potato and, err, lots of salt. I wouldn’t swear that any olive oil had been seen dead near it. An unexpected bone came away as I ate and actually pierced the roof of my mouth: there was blood on it when I managed to pull it clear. The salad, served on the side, was fresh but utterly lacking in flavour. And that’s what you get when you don’t use the best ingredients. And when you eat at tourist venues with nary a local in sight.

We didn’t bother with dessert, but walked back to La Terrasse du 7eme, at Place d’École Militaire, where we tend to start Paris days (with a croissant, coffee and glass of water) and end them (with something rather more alcoholic). That night, we washed away the flavour of culinary disappointment with several drinks.

There is, of course, an argument that the occasional disappointing (or poor) meal is a good thing – if only to sharpen up one’s culinary critical faculties.

But one such experience per trip is quite enough. And fortunately, on the Monday night (our last), the previously mentioned Le Bosquet was open.

After mediocre (at best) foie gras the night before, I decided to have rather better stuff. And much better it was. Just a slight complaint – the toast was perhaps a tad overdone. 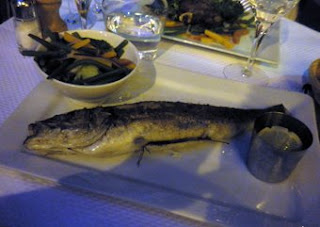 Then on to Bar grille au thym – or sea bass, grilled with thyme. Never mind ‘with thyme’, it was stuffed with the delicate herb, giving off a beautiful aroma as it arrived on the table, accompanied by a nice selection of well-cooked vegetables in a bowl. And jolly good it was too, washed down with a carafe of Chateau puech haut rosé from the Languedoc.

Next to us was seated a couple, barely acquainted. A young man from New Zealand, entertaining a young woman, freshly arrived in Europe from the US, on behalf of a friend. He gabbled away – possibly nervously – about his achievements and ambitions. She, stick thin as it was, munched her way through half a bowl of leaves, although she did wash them down with a couple of mojitos. It reminded me of Patsy in Absolutely Fabulous; barely able to remember how to masticate, and living off Champagne and vodka, the antithesis of sensuality. And her we were in this most sensual of cities.

And I remembered all my own dieting, and thought again, just how wonderful it is to really enjoy good food – to enjoy life.

It was, therefore, a perfect, celebratory end to the meal to order crème brûlée, with a fine, vanilla custard and a wafer thin crust of caramelised sugar on top.

So in terms of a ranking, Café de l’esplanade came just ahead of Le Bosquet, with Septième Vin just behind that. And the tourist venue a very long way behind. And it worked out at as reflective of cost. So there are two lessons to remember: you really do get what you pay for, and avoid tourist haunts like the plague.

Oh, and simplicity – with the best ingredients – beats everything else into a cocked hat.
Posted by Amanda Kendal at 12:17