Time to give the tastebuds a lift

Right. That's it. Enough of this winter thing!

It's been a long one – and colder than for many a year and with far more snow, more widely distributed, than the UK has seen for – well, decades. And with more of the white stuff forecast for the coming days. I find my enthusiasm for the season fading somewhat.

My body wants a change. I can feel it in terms of what I want to eat. I'm not actually craving light salads yet, but I'm moving away from what might be viewed as the most obviously season hearty, comfort food.

The last couple of weeks have seen a binge on pasta: but not with heavy sauces. A couple of shots at one I love where you roast tomatoes, red pepper and red chili, then blend that carefully with some toasted ground almonds, adding a little virgin oil if you need to loosen it.

Last Saturday, when The Other Half was gadding around in Yorkshire for the Rugby League, I made myself a dish with quality tinned sardines, sultanas, some dried chili and some pine nuts. And tomorrow, when he heads in the same direction, I shall quite probably open another can of sardines and do them with chili, garlic and fennel.

All dead simple, all quick, all cheap, all tasty – and all healthy.

But last weekend I roasted a chicken for the first time in more than a couple of months. The first time since the kittens arrived, indeed. And of course that afforded the opportunity to experience being thoroughly kittened when I was stripping the carcase to make stock on Monday evening.

None of our previous cats – nor Boudicca – have ever been bothered about chicken, whether in a prepared cat food or the proper stuff. With the Queen B, indeed, it seems to be her least liked meat flavour. Otto, on the other hand, seems to have set his stall on becoming a full-blown feline bon vivant. When I gave him and his brother some scraps to taste, he went bonkers – and even growled lowly at Loki, as if to say: 'This is MY chicken – not yours!'

After stock making, I took the opportunity to make risotto last night. And with plenty of meat left from the weekend bird, I decided to find a way of using some with this classic rice dish.

I have to say, I was delighted with the result.

Take a shallot or two and chop finely. Soften this is some olive oil, adding some chopped garlic and chopped celery as you go.

When it's good and soft – but not brown – add your risotto rice (a good basic guide is around 45g of raw rice per person). Keep stirring and after that's gained a nice translucence, pour in a glass of Noilly Prat. If you can't get that, use white Vermouth or even a dry white wine. The smell at this point is utterly divine – and just think of the flavour it's adding.

After that's absorbed, start adding chicken stock by the ladle – make sure you've had it warming on another hob, because you don't want it to cool down the dish. Stir frequently and, as each ladle of stock is absorbed, add another. It'll probably take around 20 minutes.

In the meantime, take a parsnip or two and peel it. 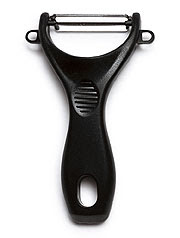 When you've done that, use a potato peeler like the one pictured to cut long ribbons of parsnip.

Heat a couple of tablespoons of olive oil. Add the parsnip ribbons. As they soften, add some sage leaves and then a glug of the booze you used earlier and let it bubble away for a few minutes. Again, a great smell. Season to taste – plenty of fresh ground pepper is great.

Once your rice has absorbed all the stock it's going to, check your seasoning and then add your cooked chicken. I didn't dice mine, leaving it in pretty much in the shapes and sizes that had come when I'd torn it off a thigh bone. Let that warm through.

Then you could do the classic risotto thing of adding a knob of butter and some grated Parmesan, but since The Other Half hates cheese, I skip this and the butter and add a good dollop of crème fraiche instead. Then pop in around half your parsnip and sage and stir carefully.

To serve, pop the risotto on a plate or in a bowl and top with the remainder of the parsnip mix.

Still comforting, but pretty healthy, it tastes great, it's really easy – and it's a lot lighter than those classic winter warmers.
Posted by Amanda Kendal at 14:49