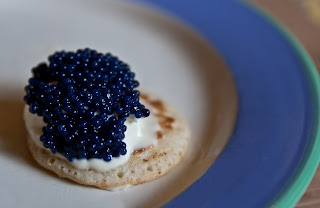 Imagine a food that would make you forget everything else – even the discomfort of eating it. What would that food be for you – what would send you into such raptures that you'd forget anything else but the taste?

This isn't an entirely academic question. I probably wouldn't quite have realised it before yesterday, but blinis, warmed and topped with crème fraîche and lumpfish roe, is the sort of food hit that does it for me.

As explained some time ago, I'm currently in the middle of long process of dental treatment, tackling the results of the undiagnosed (and un-dealt with) gum disease of a couple of decades.

We're at the half-way point now, as I get used to a full set of gnashers up top for the first time in some years. They aren't wonky either – or at least not since I tried some fixative. Having said that, several of my remaining bottom teeth are most definitely wonky – and if anything, that's increasingly obvious.

But hey – we're on the way. And if you asked me, this time last year, whether I'd be this far down the dental road, I don't think I'd have even wanted to have the conversation.

So that has to be one of the most important things that happened to me in the last 12 months. Not just on a food front – although it's going to have a massive impact as the treatment progresses to its logical conclusion – but in other ways too. I'm beginning to be able to smile again, for instance – although if I see myself in the mirror doing it, I barely recognise the face looking back.

But setting all that aside, what have been the big experiences/lessons of the last year?

Well, the Orient Express was certainly an experience – although personally, I think that Venice was more affecting. And of course, to eat in Italy was a revelation.

Grilled sardines on a sailing boat off the Spanish or French (depending on who you believe) coast – perhaps that was culinary nirvana.

Bistrot Bruno Loubet gave me the best eating out experience I've enjoyed in the UK – a quality of food and cooking (and a price, come to that) that I've only experienced previously on the Continent.

Reaching a point where looking at a recipe by the likes of Joël Robuchon or Michel Roux or even Escoffier doesn't frighten the life out of me. I'm not entirely sure when that happened, but it does seem to have taken root. It doesn't mean I'm a good cook, but I think it illustrates progress of some sort, and a learning curve that hasn't ground to a halt a mere few metres after beginning.

My food photography has developed hugely this year – and here's another in the style I've been creating for myself. 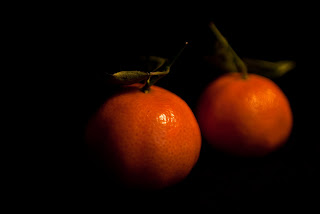 Very Dutch Old Master, as someone described the style elsewhere.

The whole black background thing was an accident, but it works rather well, I think. Indeed, it does invoke those wonderful old still life paintings that you can find in the galleries. And I want to explore it much more.

Then again, I didn't start photographing food in a particularly serious way – so what I've done thus far is a real plus, and leaves me a real challenge on building on that.

On the wine front, I started to get a better understanding of what wine is about – and how to taste it. I have a long way to go – but what a pleasant journey lies ahead!

Finally, I think it started to dawn that on me that there is not so much of a divide between what we think of as everyday food and what we see as 'posh' food. The gap continues to narrow for me. How much I can personally bridge that space remains to be seen.

And as my rather light research illustrated toward the end of the year, it's something that has filtered into the mainstream eating life of this country, with many people falling for the con that they cannot afford quality – yet shelling out no small amount of cash for inferior food.

Entirely apropos of nothing that has just gone, I was down at Borough Market earlier today, for my final food shop of the year. Amongst various other things, I got some pressed tongue. It was, as it happens, the first thing I've bought from acclaimed butcher The Ginger Pig.

But 'lunch tongue', as I've always heard it described before, has long been something I've liked. On the other hand, after tasting this – from a stall that had full tongues for sale too – it could become something I love. The quality is just wonderful: moist and flaky and full of flavour. It'll all be gone before I have time to make an actual sandwich.

I'm not, at this stage, going to set myself a specific serious of challenges and tasks for the year ahead. I don't want food and cooking to become Too Serious. It should be fun – and always a pleasure, even a pleasure that you take pretty seriously. If it stops being a joy, though, you might as well just pop something into the microwave and watch the telly while you consume it, ignoring the question of its taste.

So to one and all of you – thank you for reading this blog. I can only assume that you're not a bunch of complete masochists, but that you do find something here to enjoy and amuse!