Raise a glass to the haggis 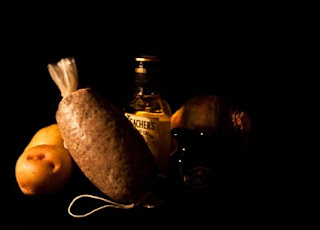 I might be back in the Metropolis, but that's no excuse to let go of all things Scottish just yet.

It's just gone six and I'm back in my own kitchen and there's a haggis simmering gently on the stove.

Later, I'll chop and then boil both some potatoes and swede, which will then be mashed and buttered, with the latter getting plenty of ground black pepper too for good measure.

I just might add a touch of whisky to the haggis itself once I've cut into it.

After all, this is Burns Night.

On Monday, with time to spare after my work was done, I caught a bus to Crow Road and walked up until I found 334 – Christie butchers, an address given to me by the concierge at the hotel. I don't know, to be frank, whether he often gets asked where a guest can get hold of good haggis and black pudding, but he came up trumps.

It's a proper, old-fashioned butcher, with an amazing range of meat – much of which comes from their own Duntiglennan farm. That was exactly what I'd been hoping to find.

I bought my haggis (look at the picture to see just how un-factory produced it is), together with a third of a huge black pudding they made themselves too. Meat products of something a little under a kilo in weight came to a grand total of £5.13.

As we finished the transaction, the butcher nipped into the back and brought out a freshly cooked tomato sausage, cut into three, for the other two customers in the shop, and myself, to try. If I hadn't been having to store my purchases overnight in a minibar, I'd have bought some – it was delicious and moist.

It had been a funny old start to the day that, for various reasons, had left me feeling frustrated and a tad grouchy. My successful trek for haggis brightened me up no end.

Then there was the question of lunch. A few yards further back along Crow Road I spotted an old-fashioned bakers called Bradford's – one of a small chain that was established in 1923. In the window, alongside cakes and buns, were Aberdeen Angus and Scotch steak pies.

Remembering a conversation from Sunday's lunch, when one of my friends had assured me that any pub in the area does steak pies – and does them well – I mused over whether there was such a pub nearby. And then it struck me that the baker itself might sell me one, warmed up.

Inside, it turned out (rather obviously, on thinking about it) that they had a cabinet with cooked ones ready and waiting.

The woman asked me whether I wanted an Aberdeen Angus one. I asked what she recommended. She said that, personally, she preferred the other (slightly) cheaper one, as she found it more moist. I had one of those and stood outside at the bus stop, in the chilly wind, munching a pie of minced steak, oozing tasty fat and surrounded by a peppery, thin, crispy pastry. It was a moment of perfection – and my grin just got wider.

On the bus back into the city centre, two very helpful ladies guided me as to when to get off. They happened to be sitting on the same seat but had never met. Within moments of my asking if they could kindly let me know when we reached Charing Cross, where the driver had suggested when I was paying my fare, they were exchanging memories and informing me in no uncertain terms that there was nothing to see there ("40 years ago there was plenty there, my husband tells me – I wasn't brought up round here so I don't know – but not since a motorway was built through it") and that they'd tell me when was best.

Bearing in mind the benefits of local knowledge, I did as I was told. When I got off at the appointed stop, I began an amble down a slight hill into the main shopping area.

Pausing to light up, I noticed a rather different building. It seemed to be a jeweler's shop. But on closer inspection, it became clear that inside and upstairs was the Willow Tea Room, designed by Charles Rennie Mackintosh. I glanced at the menu and dived in.

Sometimes it really does pay to listen. 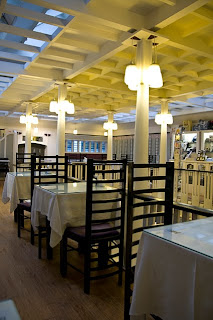 On the first and second floors are two tea rooms. I sat in the lower one – and ordered a pot or tea ordinaire and a scone, with butter, strawberry jam and cream.

It is a very, very long time since I've been in a traditional tea room – a vague memory drifts past of going to an Olde Worlde tea room somewhere in either Cornwall or Devon with my parents on a family holiday: possibly the latter for a Devon cream tea. The waitresses were all elderly and with permed hair to go with their starched aprons and little caps.

But this was extra special, with Mackintosh-style furniture and decoration everywhere. Although it seemed a tad strange to be there after first really encountering the Mackintosh trail in Port Vendres in the south of France, of all places.

The scone was warm and light and beautifully crumbly. The portions of butter and jam and cream were generous. The tea was exactly what I needed. 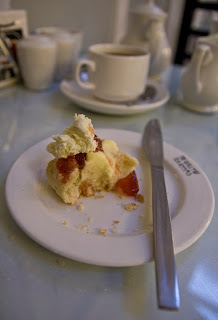 There was no music. It was delightfully quiet, apart from the noises in the tiny kitchen and the gentle buzz of conversation from the few other customers who were in at that time of the afternoon. There was a hint of Paisley and brogues and blue rinses.

The butter melted on the scone and I piled jam and cream on top in gluttonous abandon. The grin was getting wider still. Food – it really is therapy.

And now the haggis is nearly ready. I know there's a great debate about what a 'neep' is – or more to the point, what some people call a turnip, others call a swede. It's a difference between Scotland and England – but also between parts of England.

So, here's a glass to the haggis – and it seems entirely apt to conclude with a few lines from Rabbie Burns himself.

It's coming yet for a' that

That man to man, the world o'er

Shall brithers be for a' that"

From Is There Honest Poverty by Robert Burns
Posted by Amanda Kendal at 18:14