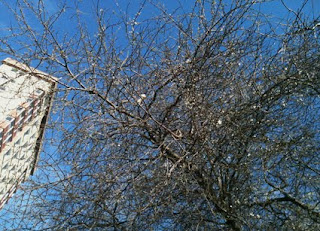 Parts of the UK are basking in sunshine this week - but the temperature has been climbing for a week or so.

When that happens, your mind starts turning away from the big, comforting dishes of the cold, dark months to lighter fodder for lighter days.

And then it's difficult to avoid thoughts automatically turning toward the food of the Mediterranean.

It's some years ago that I started becoming aware of southern Italian cooking, thanks in large part to River Café Two Easy. Without ever really giving it much thought, it became a favourite book - particularly turned to whenever The Other Half was out of town and I was cooking for myself and could eat things like squid.

Alongside very rustic soups, roasted meat dishes (the three-and-a-half hour chicken that I do comes from this book) are various pasta dishes - many of them striking even on the page because of their extraordinary simplicity.

Take the classic Sicilian combination of sardines with pasta. In that book, Rose Gray and Ruth Rogers use filleted fish with garlic, flat-leaf parsley, dried chillies, pine nuts, raisins, saffron, lemon and, of course, good virgin oil, and serve it with linguine.

It's not far removed from the apotheosis of exactly that fish and pasta combination, sardo.

Actually, I knew the basics of this specific mix of flavours from an earlier purchase - a book of 32 Practical Pasta Sauces (no author listed) that I picked up for something like £1.99 in Lidl some years ago.

On the basis of cost per recipe, it's possibly the best value cookery book I have.

There's a nod toward sardo in its pages - although it uses fennel bulb, thinly sliced, instead of the dill-like herb that is so much a part of Sicilian cooking and grows alongside the roads of that island.

Otherwise, the only real difference is that it skips the saffron and raisins.

In Giorgio Locatelli's Made in Sicily, however, we get something closer to the real deal.

His Pasta con le sarde has the sardines, of course, but with anchovies too as well as the saffron. And "3 sprigs of wild fennel" of the sort (hopefully) that is now growing in a pot in my garden and which I was astonished to find on Columbia Road being sold as 'bronze fennel'. The raisins are replaced in Locatelli's version with the greater succulence of sultanas.

Okay, there are one or two other refinements: a little white wine here, some breadcrumbs and some chopped onion there, plus a small amount of 'strattu, a Sicilian type of particularly intense tomato purée. Or you can just use purée, since you're unlikely to find 'strattu anywhere outside Sicily, where making it is very much a community affair.

And if you haven't got wild fennel, you can use a teaspoon of fennel seeds, soaked in a little water.

But in those very Arabic ingredients of the nuts and the spice and the dried fruit, together with the chilli and the lemon and the really good oil, you start to get a sense of the island's history - and its cuisine.

Now close your eyes for a minute and imagine it all as fresh as it's possible to be, cooked and eaten under a blazing sun and a saturated, azure sky.

But back to that Lidl book: regular readers may remember a dish of roasted tomato, pepper and chilli, with toasted, ground almonds that has become a favourite. The nuts and the chillies suggest the south of Italy.

Returning to River Café Two Easy' I've tried several more dishes - and often the ones with some crumbled dried chilli and lemon.

Time and again, since starting to discover these combinations of flavours, I return to them at the first opportunity.

And the Locatelli book is expanding my range. He has a beautiful and ridiculously simple salad with chopped green olives and celery at its heart, plus finely-chopped mint, and finished with a simple dressing of red wine vinegar, white wine vinegar, a little water, seasoning and virgin oil - and since it'll keep in the fridge for six months, it's not extravagant or wasteful to make a batch up even for one person.

Regardless of the currant weather, perhaps the emphasis on simplicity and quality ingredients that are the hallmarks of southern Italian cooking in general and Sicilian cooking in particular really is blue sky thinking when it comes to culinary matters?
Posted by Amanda Kendal at 09:33