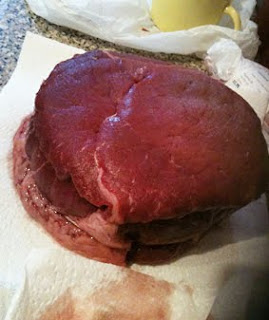 Regular readers of this blog will know that, among my pet gripes is the absence of modern recipes for slow-cooked food that actually involve, err, slow cooking.

In other words, not 90 minutes or two hours, but hours!

I can only assume that writers and publishers have convinced themselves that the modern domestic cook will not countenance cooking something for any longer longer.

But the problem with this thinking is that it doesn’t work.

I’ve eaten traditional beef dishes in France that have been melt-in-the-mouth gorgeous, coated in voluptuously sweet, thick sauce that, however humble the dish, leave you in sated awe.

In particular, I’m think of you, boeuf à la gardiane, in Nîmes in the summer of 2010.

And then I’ve tried to reproduce such dishes back at home. And I’ve also tried to cook dishes that use beer instead of wine.

And for all that I follow the instructions – from a variety of supposedly reliable sources – they invariably fail or at least fall short.

Take this recipe for a carbonnade flamande, a classic Flemish, northern French dish.

And this is without mentioning all the different books I’ve cooked such dishes from – often books that have a history of providing me with excellent dishes. Except when it comes to anything that requires slow cooking.

The reason that they fall short is that they always seem a tad bitter when I cook them.

Well, the penny has finally dropped. That’s one of the differences that serious slow cooking makes – it sweetens everything.

This was finally grasped when I spotted the recipe for a stacotto in Elizabeth David’s Italian Food.

This hearty beef stew is almost ridiculously simple. But the divine Mrs D’s instructions made it clear that we were talking in terms of five hours cooking in a “very slow oven”.

My only problem was knowing exactly what that means in terms of the dial on my own cooker. Remember my other perennial gripe about lost skills and knowledge? Well it's always applied to me too – I'm having to learn from scratch.

I opted for about 80˚C, on the basis that that is what works for the River Café-style three-and-a-half-hour chicken that I love.

As it happens, it didn’t quite work that way and, on three hours, I turned the heat up a little; and then some more as it became clear, on five hours, that it was not ready.

When we ate it, it still wasn’t cooked quite enough for what is supposed to mean ‘over cooked’. But it was tasty and far, far closer to the real slow-cooked deal than I’ve managed before (apart from the recent cassoulet).

Mrs D started with around a kilo of lean meat (in imperial terms). I bought a piece of 1.5kg and made some adjustments on that basis. The meat was from Wild Dartmoor Beef and, as farmer Richard Vines always stresses, it's grass-finished – which really adds to the quality. 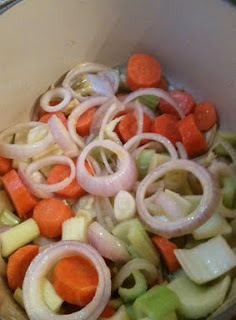 Melt some lard in a heavy pot. Gently brown the vegetables.

Add the meat – in one big piece – and brown on all sides. Add a couple of Italian sausages (or Toulouse ones, as I did), a glass of white wine, a generous dessertspoon of good tomato purée and some seasoning. I also added the blood that had been in the packet with the meat – why waste it? – and which I'd kept when I took the meat out and dried it off.

Cover with a disc of parchment paper and then your lid – and cook.

Now, since my little struggle, I have found this recipe for a daube by Paula Wolfert, who knows a thing or two about the cooking of south west France in particular and the Mediterranean in general.

She starts by heating the oven to 175˚C, cooking at that for an hour, then turning the heat down to 120˚C and cooking for a further three to four hours, “until the meat falls apart easily”.

I suspect that this is the way forward on the stracotto front too.

In the meantime, my not-quite-a-stracotto has meant very little cooking for the days since – and I’d hardly slaved in the kitchen on Sunday anyway.

On Monday, it was reheated, with a tin of tomatoes added as per some online recipes. These show clearly that, like any of these great, gutsy traditional dishes, there are as many ways to make it as there are people who have made it. And then a drained, rinsed tin of cannellini beans finished it off.

On Tuesday, it was served with par-boiled new potatoes that were finished in the pot.

And yesterday, the remains of the meat were cooked with chopped onion and crushed, boiled spuds in lard – a sort of cross between a hash and a bubble ‘n’ squeak.

It’s been a beefy week, alright! And real slow cooking is absolutely to be utilised even when, like me, you haven't got a slow cooker or the room for one.
Posted by Amanda Kendal at 18:30