Fish to console after a loss 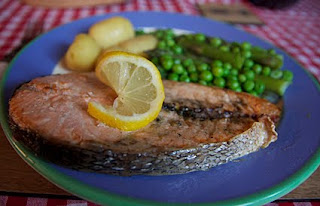 How can it be that, after years of having poxy mobile phones that I hated – and even felt were like electronic tagging – the only mobile phone that I've ever managed to break and lose is the one I actually like?

Yes, that's right readers: I have lost my iPhone. Somehow, I managed to respond to a text while in transit – and then, when I thought I was putting the phone back into my handbag, seem instead to have let it slide down the outside of the bag and out of view (I presume).

So what on earth can one do to cheer oneself up?

The answer, as so often, is to get into the kitchen and cook something good.

In this case, it was a planned treat, since on Broadway Market on Saturday, Vicki had some wild salmon.

I'm not sure that I've ever had wild salmon – the only thing I know for certain is that if I have, then it hasn't been for many, many years, but have become used, instead, to farmed salmon.

However, after recently reading Oliver Thring on farmed salmon, I was feeling a tad dubious about that stuff. Charles Fishman also discusses the dismal environmental impact of large scale salmon farming in The Wal-Mart Effect – in Chile, in that case.

My ethical muscle has been convulsing ever since.

So anyway, I decided to indulge and buy two salmon steaks from Vicki.

The kitchen activity soon saw me getting over the loss of my phone and singing highlights from The Wizard of Oz as I bustled around.

Grilled simply, with just a little olive oil to lubricate and served with a slice of lemon, a very few new potatoes and some fresh peas and asparagus, it's hard to imagine an easier and better seasonal treat.

And yes, it really is different: both in taste and texture.

So, while I will have to deal with the loss of the aforementioned phone tomorrow, at least this evening I have managed to console myself with seriously good fodder.
Posted by Amanda Kendal at 18:51