Me and Bob Dylan and Manchester Day 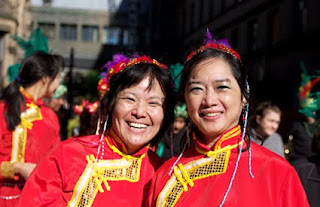 It's not often that you get to pen such phrases – but Manchester's the sort of sophisticated place that allows me to link my name with that of Mr Zimmerman.

Yesterday, after finishing work, I pottered out with the camera while the sun was shining above. One of my targets was only a few metres from the hotel – the former Free Trade Hall. I say 'former', because it was, a few years ago, converted into another hotel.

It was built on the site of St Peter's Fields, where in August 1819, cavalry charged into a crowd of 60,000–80,000 who had gathered at a meeting to demand reform of parliamentary representation. At least 11 people were killed and 400 injured in what became known as the Peterloo Massacre. 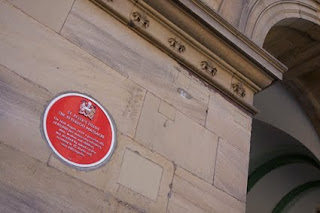 The Free Trade Hall was originally erected in order to mark the repeal of the Corn Laws. As an auditorium, it has played hosted to all manner of acts, from Kathleen Ferrier to the aforementioned Dylan to Pink Floyd to the Sex Pistols.

But back in the 1970s, when I was attending Fairfield High School for Girls, our annual speech day took place there and I, as a member of the choir, would be on stage.

Setting aside memories of the obsessional need, as young ladies, to keep our visible knees together at all times while sitting on the stage, I remember it as a fabulous place – vast and magnificent. It seems nothing more than an act of cultural vandalism to have destroyed everything of it except the facade.

I remember the acoustics as being good. I remember performing Windmills of Your Mind one year.

It doesn't seem inappropriate to muse on such a thing this week, as I listen to debates and pen stories about the human face of the government's austerity plans.

One of today's debates featured the small matter of meat inspectors who work for the Food Standards Agency. Many are being bullied and abused – not just by the big food producers, who want to cut corners in the drive for extra profit, but also by the FSA itself, over which the industry "holds too much sway", as one delegate put it. And these are not, I assure you, timorous types claiming such a thing.

So which is more important? The profits of big agriculture (and the big food retailers) or our health? And if the latter will have no negative impact (or risk of negative impact) on the former, then why the need for any abusive behaviour?

Do we really need to be reminded that BSE – or 'mad cow disease', as it was colloquially known – was a direct result of the food industry doing two things:

• feeding a vegetarian animal the flesh of other animals (sheep);

• asking the government of the day to let it reduce the temperature at which it could 'cook' said sheep remains in order to save costs.

The first was going right against evolution, biology and nature, whatever you want to call it. The second showed where priorities lay. Both were just begging for trouble.

We really shouldn't be having this sort of discussion at all, but the reality is that the government actually wants to get rid of any form of independent regulation – and replace it with self regulation. How many of us really trust that, given the interests involved?

Now just to be clear for anyone who's new to this blog: I am not opposed to profit. I believe in a mixed economy. And I don't think that everyone should be on the same wage.

But when profit is allowed to be the most important factor in a situation, you don't just get BSE, you get Southern Cross and you get Winterbourne View as well.

I find myself, frankly, not so much depressed by the approach of the current government, but by how effective has been the promotion of the idea of profit as the be all and end all of everything, which has been promoted – or not tackled – by successive governments, hand in hand with an entirely ideological belief that private is always better than public.

Fortunately, my mood was lifted by managing to catch the end of the second Manchester Day Parade, with community groups from across the city taking part. Colourful, vibrant, noisy and fun.

The picture at the top of this post is of two participants from the city's Chinese community, who had got together with a number of other groups to form one massive dance and music troupe. 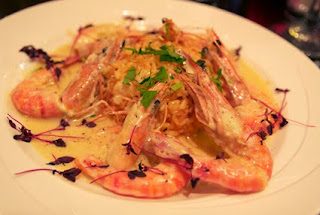 And after showing our faces at one of the first socials of the week, we managed to find decent fodder in Gio, an Italian restaurant barely even a stone's throw away.

It was carpaccio beef with shaved Parmesan and rocket for me, followed by the sort of large prawns that require you to get your fingers messy, and than an indulgently big portion of ice cream – chocolate, vanilla, pistachio and strawberry.

And that was entirely enough to lift the spirits.
Posted by Amanda Kendal at 17:14