Let's hear it for the 'shrooms 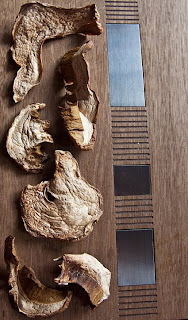 Last week’s trip to Lina Stores in Soho produced, amongst other things, a bag of dried porcini, the like of which I have never previously known.

Dried mushrooms have become a store cupboard staple in recent years, but none that I have ever purchased in a supermarket have come close to the aroma of these.

I have an idea in my mind of mushrooms as autumnal food, but with the knowledge of having such superior ingredients around in mind, I decided that Tuesday should be a risotto night.

But the aim was to make this mushroom risotto just a little bit special.

So, stock was defrosted as usual and then warmed up with a handful of the new porcini.

Finely chopped shallot, celery and garlic were softened in olive oil, to be joined by Arborio rice.

A glug of white wine followed. Once that was absorbed, the process of adding the now-hot stock, ladle by ladle, began.

In the meantime, organic chestnut mushrooms were sweated down in a tiny amount of olive oil. White wine and lemon juice were added – just a little.

Everything was tasted and seasoned where necessary.

When the rice had absorbed the maximum stock (along with the rehydrated porcini by this time), the chestnut mushrooms were strained and added.

And then the denouement: I’d found a small roll of white truffle butter in the fridge that I’d bought before Easter and then forgotten. So instead of either the classic butter and Parmesan or my own usual crème fraïche, I took the pan off the heat and stirred some through.

And that was not bad at all.

I have, as it happens, just recently got a book on this glorious rice dish – Risotto! Risotto! by Valentina Harris. It’s not so much a question of needing the basics as being curious about all the differently flavoured risottos that she includes recipes for.

That was the result of a browse around Amazon leading me to this out-of-print books, which was available from a private seller.

In the meantime, on the basis of searches and purchases, Amazon seems to have decided that my core interests in terms of reading matter are currently politics/economics, Manchester City, food and Italy.

In terms of the latter, it seems that an interest in Italian food also translates into wanting to read umpteen books about the Cosa Nostra. I don’t.

Still, Amazon more than has its uses. It could be argued that this is a situation where ‘economies of scale’ works rather nicely – and certainly in a way that counters most chain booksellers these days.

Since Amazon can allow the reader to access hundreds of thousands of titles, rather than the more limited numbers in a bookshop – a number that is further limited by most chain bookshops (and other book retailers, such as supermarkets) only opting for the most obvious big sellers – you can end up finding things that you had no idea existed.

I don’t actually like the Amazon search engine much, because you seem to get so many results on an search, but the recommendation programme does produce some nice things.

The latest such discovery is a pair of books by Guardian food writer Matthew Fort, about his travels around Italy and Sicily (the latter a book on its own) on a Vespa. They apparently combine travel, food and history.

Now Fort is not some 20-something feeling all rebellious on his trendy wheels, so I expect something a bit different. I’m looking forward to them.
Posted by Amanda Kendal at 20:56