And now for some pork done Italian style 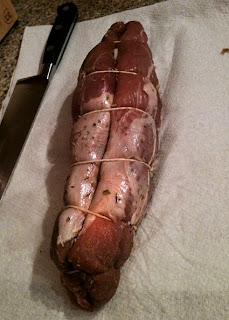 After a recent post about slow cooking, Bill King had mentioned a recipe for 12-hour pork. Although I'd been considering doing a flamande carbonade at the weekend to try to develop the lessons of the previous Sunday, Bill's was a comment that turned my mind.

Pork is notoriously difficult to cook - it's all too easy to end up with dry meat. And as such, it's not a meat that I cook very often. But I started looking and, in fairly short order, had returned to Elizabeth David's Italian Food.

And there was a recipe for pork loin, cooked in milk.

Now the are plenty of recipes online for pork cooked in milk, but most seem to involve for more meat than two people were going to require. But loin sounded sensible.

On Broadway Market, there were no rolled pieces of pork, so what I decided to do was to buy two smallish pieces of tenderloin instead and place them together, with Mrs D's suggested stuffing, before tying everything into something more closely resembling a roll.

The stuffing in question was a little flexible - I don't think Mrs D expected cooks to be utterly tied to a recipe anyway, but in this case she stipulated garlic, coriander seeds and marjoram or fennel.

Then you dice an onion finely and brown it in plenty of butter - approximately 35g. When this is browning nicely, add about 35g of finely chopped prosciutto or Serrano and let that cook too.

By now, it's getting a bit crispy - and it smells divine. Take your roll of loin and brown this in the pan.

The weight of this was just under 0.7kg. According to the recipe, you need around 0.8 litres of whole milk for this amount of meat, but that rather relies on the pot you're using.

Anyway, bring the milk to the boil and, when it's reached that point and the pork has browned, pour it over to just cover the pork. See what I mean about the size of your cooking receptacle? Mine – a large sauté pan that just took the length of rolled tenderloin meant that I needed to rapidly boil more milk to cover the meat.

But once you've reached that point, the milk needs to simmer away until a skin forms over everything.

And then you leave it for a good hour while it continues to simmer away.

After that, scrape all the skin and the crackly bits down the sides of the pan and back into the general sauce.

Mrs David says that this is where the liquid can evaporate remarkably quickly, so you have to watch it. But she didn't have quite as much liquid as me, so I was in little danger of it boiling away completely.

The meat, which had held together well even with my very inexperienced string work, was very tender and tasty.

The sauce? Well, it's counterintuitively lumpy but tasty.

I served it was rice and some sautéed courgette on the side. (Should that be zucchini?)

The biggest problem with cooking like this is that I've never eaten such a dish – so you don't really know what you're aiming for and whether it works as it should. It was certainly interesting, though.

But before that, early in the afternoon, as the sun finally broke through the grey and gave us a touch of divine warmth, I finally tried something else that has been stewing around in our heads for almost two decades – something that I had once tried.

Many years ago - almost 20 - when The Other Half lived at Finsbury Park, he took me for a birthday treat one year to an Italian restaurant on Blackstock Road.

A greasy spoon by day, it would be transformed after dark. I think we went there twice: certainly I remember a power cut on one occasion, leaving us eating by candle light. 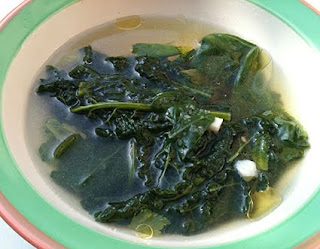 But we have also both remembered the zuppe verde that we had at least once.

It was a light broth, with assorted leaves in it.

Yet for all that I've hunted, I've never found a recipe. And, since I have been wedded to recipes, it has thus remained a memory.

But enough was enough. With the spring-like weather, it would make a perfect light lunch.

The morning had started with stock making, using the remains of Saturday's chicken. One of the jars of this thus went into a pan with about the same amount of water, two bay leaves and six peeled, roughly chopped cloves of garlic.

I let it simmer away for a very short while, before adding a few cored leaves of cavallo nero, some spinach and the few leaves that had been on top of the celery 8'd bought at the market.

After about four minutes, I tossed in some very loosely torn basil and gave it all another minute.

Checking the seasoning, it needed a good two pinches of salt, plus black pepper.

It was served garnished with a drizzle of virgin oil and a little sprinkle of fleur de sel.

Now memory is as notoriously unreliable as pork is difficult to cook. But while it might have borne little more than a passing resemblance to what we had eaten all those years ago, it was certainly tasty.

This, for someone so wedded to recipes books, was a really enjoyable success. And it'll certainly be on the menu again. Clearly two, there is an extent to which you can play around with what leaves you use, depending partly on what you have in. And indeed, I found myself wondering how it would work if you replaced the basil with mint, which is apparently a particularly popular herb in Rome.

There's food for thought.
Posted by Amanda Kendal at 07:44