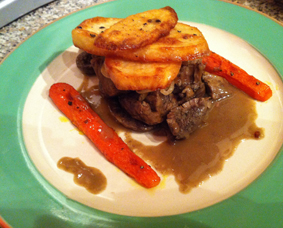 It was arguably another one of those ‘watching too much Masterchef’ moments.

I had headed up to Broadway Market as early as possible on Saturday morning, with little in the way of an idea for that day’s dinner.

But when I spotted that Matthew had a whopping six lamb kidneys on the stall, my mind turned to manners in which to use a bounty.

I settled on a Lancashire hotpot – and Matthew duly obliged by boning a piece of shoulder.

Back at home, an idea started to form. Would it be possible to deconstruct this classic dish?

Well, obviously it would – but would there be a point to doing so?

Allow me to explain. As I’ve been learning more and more about slow cooking, I had tried to do a seriously slow-cooked hotpot., simply taking my usual recipe and slowing down the cooking process.

The dish goes in the oven for around two hours, covered, before the lid is removed for a final 20 minutes to brown up the potato topping.

But when I tried reducing the heat and leaving it longer, the potatoes turned a really dreadful grey.

I don’t know why – mill workers in Lancashire used to take their pots in to the baker on the way to work and, when he’d finished baking, he’d pop them in his cooking oven so that they’d be ready for when the women were coming home from the mill.

So a real slow cook is obviously entirely in keeping.

However, it seemed that cooking the ingredients separately would also do the job.

So, the start, half the lamb and four of the kidneys were cut up (the rest went in the freezer).

The meats were then browned in a little butter, before having around 100ml of lamb stock added (I’d defrosted a small jar).

The stock makes a very thin gravy for the dish – and allows it to steam, so you don’t need a huge amount.

And then it was lidded and left to simmer away on the hob with the addition of some bouquet garni.

Next up, I boiled a large potato and two carrots – all peeled but not cut up – in the remaining stock and boiling water, until barely cooked.

Letting them cool enough to handle, the carrots were then halved lengthwise, and the potato sliced into pieces, approximately half a centimetre thick.

With the oven heated to 180˚C (fan), a baking tray was lined with parchment and then very lightly greased with duck fat before being warmed in the oven.

The slices of potato were laid out on the film of melted fat, together with the carrots; all were brushed with a little of the fat and then given a few good twists of black pepper.

At 20 minutes, everything was turned, given a sprinkle of course salt, and popped back for a further 20 minutes.

The missing aspect at this stage was the onions. Here was another thing I though might be bettered by the deconstruction. Usually, the onion and slices of carrot are placed in the pot around the meats at the bottom, thus partly cooking in the stock and partly in the steam.

On this occasion, the sliced onion was cooked extremely gently in a little duck fat until golden.

Last, but by no means least, when the meats were cooked, most of the stock was ladled into a saucepan to have buerre manié whisked into it to thicken.

And then it was onto the plating up.

Large rings held the meats in place. The onion went on top, with the roasted slices of potato capping the lot.

The carrot halves were served on the side, with the gravy around the meats.

The only things I’d be tempted to do in future would be to cut the meats into smaller dice – mostly because it would be neater – and to reduce the roasting time on the potatoes and carrots to 15 minutes after turning.

But as with the deconstructed cottage pie, it was something that was worth doing because of how it allowed the individual flavours to really come through.

The onion is better for cooking this way, I think, while you also have much greater control over the carrot and potato.

And thickening the gravy also really helps to intensify the lamby flavour.

The presentation could have worked better – and would have with less use of the sauce, but I didn't want to risk The Other Half having a Greg Wallace moment and bemoaning a lack of liquid on his plate.

All in all, then, worthwhile experiment and a do-again dish.
Posted by Amanda Kendal at 16:25