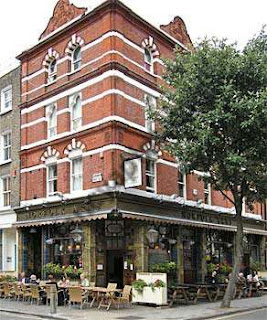 The Norfolk Arms is an old Bloomsbury gin palace, sitting on a street corner, just up from a hidden Lutheran church, and slap bang opposite the secondhand book shop that served as the Black Books shopfront of TV comedy fame.

Indeed, the exterior of the Norfolk Arms itself was seen in a couple of episodes.

It was a fairly run-down pub in those days. A few years earlier, when I had lived around the corner, it had been one of the few local boozers that I had felt no inclination to try.

But it has subsequently been reinvented as a gastro-pub, and now provides a quite regular lunch venue near work.

They’ve stripped back the walls and the floor, and gone for rather minimalist furnishing – old, cream-painted tables and the sort of chairs that probably once occupied a church somewhere, with a little shelf on the back for your hymnal.

The old bar remains in the centre of the space and food is delivered via a dumb waiter.

Today’s waiter isn’t dumb, although the service can be a tad slow sometimes – but why rush a meal? I can’t think of anywhere else, though, where I’m served by someone in hipster jeans – fortunately, the pinstripe boxers beneath appear to be in pristine condition. But Batyr is attentive without being pushy – and also sports some very nifty tattooing on his right arm.

The clientele is mixed – not quite Bohemian these days, but reflective of an area that is home to a lot of non-governmental organisations as well as more 'conventional' businesses.

Unfortunately, they’ve now scrapped the blissfully good-value two-course set lunch for a tenner deal, but it’s still better than anything else in the area – and worth paying more occasionally.

Today, I started with chicken liver paté, toast and an aubergine chutney.

The paté was excellent – beautiful texture and heaving with garlic. It made me wonder why my own efforts at paté have been too garlicky (if that’s possible). The recipe I’ve used is a Delia one and calls for raw garlic to be incorporated. But for some reason or other I found that too much. I wonder if the garlic in today’s paté has been cooked first?

Bread here is always good and the toast was no exception, while the chutney gave a nice sweetness to the course.

For my main course, I had grilled swordfish steak, accompanied by a mix of butter beans, diced carrot, mushrooms and saffron. Very pleasant, although the swordfish was close to the cusp of being overcooked.

And all washed down with a glass of nice, fruity Tempranillo.

It was a very pleasant lunch – and, as always when I eat out nowadays, I find that I learn things and can appreciate the food and the cooking more than I ever did in days of yore.

And gastro pubs are the saving grace of eating out in London these days – in many cases, providing much better value for money, and just as good a dining experience as supposedly very good restaurants.