A feast for the eyes and the mind 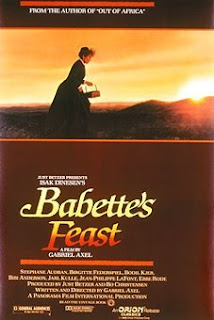 In 19th century Denmark, a refugee arrives from the violence in France.

Babette has been sent to the bleak, windswept Jutland coast by a friend, to ask two elderly sisters if she can stay with them, offering to keep house and cook for them in return.

They accept, and instruct her in the cooking that they’re used to and that they also prepare for the poor of their small community. It’s joyless food – mere fuel. The sisters are pious Christians, upholding the legacy of their late father, a pastor, who had founded their strict sect.

In their youth, both Martina and Filippa had turned down suitors or the chance to embark on a singing career, preferring instead to stay with their father.

Then, as their anniversary of his birth approaches, Babette’s ticket comes up in the lottery – her one remaining link with France. And she asks the sisters if she can prepare them and their little congregation a meal for the event.

Director Gabriel Axel’s 1987 award-winning film, from Karen Blixen’s book, is an unmitigated delight, somehow remaining as light as soufflé, even given the subject matter.

Here we have, yet again, a look at the conflict between sensuality and religion. The fear of Babette’s guests as they realise the treat that they are being given is funny – but utterly tragic and wasteful too. They vow, before the meal, to ignore what they will eat; to not contemplate. Only the old soldier, the unsuccessful suitor of Martina decades before and now returning to visit, appreciates the magnificent fare.

How can one be so afraid of pleasure? Why is sensuality so threatening? Why is life itself so threatening? For those who believe, how can locking away of oneself from vast areas of the creation that they believe is God’s be anything less than an insult to that god? Is their god really so cruel as to demand that they ignore his own creation, that he put in place merely to tempt and torment them? Or is Satan a creator too – in his case, of all sensual pleasure and the means to gain those pleasures?

The austere Jutland coast, which matches so well the Puritanism of the sisters and their fellow congregants, is beautifully photographed.

And Stéphane Audran is wonderful as Babette – a delightfully subtle and warm performance.

In some ways, Babette’s Feast is an incredibly simple story. But told like this, it is an exquisite paean to the pleasures of food, and of life itself.
Posted by Amanda Kendal at 13:31