Farewell to a golden girl 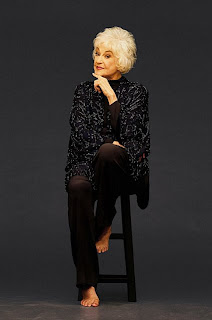 Bea Arthur left us a few days ago. The star of stage and screen died at the age of 86.

She led a fascinating life, even volunteering and serving as one of the first female active-duty US marines in WWII, but her place in cultural history has been secured by her work on stage and TV – a career that brought her a host of awards and nominations, including two Emmys and a Tony.

Arthur's stage work included musicals – she was in the cast of the first Broadway production of Brecht and Weill's Threepenny Opera, alongside the legendary Lotte Lenya, Weill's wife, who had originally created the role of Jenny.

She made her TV name in Maude, a sit-com that dared to tackle social issues that others stayed well away from – for instance, abortion, at a time when it remained illegal in many US states. before Roe v Wade.

But for me personally, although I loved her performance in Mame, I mainly think of Arthur as Dorothy Zbornak in The Golden Girls.

It’s a show I love – and not least because it was that rarest of things: it was about women, and not women who fitted a simplistic aesthetic or behavioural stereotype, particularly in terms of their age. Indeed – goodness – The Golden Girls was about older women who didn’t just hide away and die!

Arthur’s performance was a delight – and utilised superbly the things for which she was so well known: her deep, ‘masculine’ voice, her tallness and her acid-like delivery.

It always managed to stay just this side of mawkishness. As Dorothy said in one episode, just as she was in danger of getting sentimental during a rare close moment with her vindictive mother: “Call the schmaltz cops!”

We actually had our own British version of The Golden Girls, Brighton Belles, but despite having a wonderful cast (Sheila Hancock, Wendy Craig, Sheila Gish, and Jean Boht), it was pretty dire and could never match the US version.

It never ceases to amaze me that, during a period which has seen feminism bring about so much progress for women – particularly in the West – we’ve seen a decline in the way women are represented on film (in Hollywood in particular).

Where once there were many female Hollywood film stars, who opened films, who didn’t always look remotely conventional or live conventional lives, now there are so few. It’s a nightmare for female actors over ‘a certain age’ to get decent roles, while their younger counterparts seem to spend a lot of time playing ever more stereotypical and one-dimensional characters.

Perhaps that partly because, since the end of the 1970s, so much Hollywood output has been geared up for a youth audience and for a geeky male youth audience in particular?

But whatever the reason, The Golden Girls remains a refreshing delight.

And thank you Bea, for all the pleasure you gave us.
Posted by Amanda Kendal at 15:07