This means nothing to me

On Wednesday night, I bundled three white tops and a couple of pairs of knickers into the washing machine, which had already been part filled by The Other Half. Then I set it on a delayed start, to finish at 7am yesterday morning. We’re having beautiful weather at present, so the clothing could be put on the line to dry all day.

At around 7am, all prepped for the day, I pulled out the clean washing and went to hang it out. Argh!!! All the white tops were looking distinctly off colour – while the lacy one of the three (worn only once previously and destined for tonight’s big night) had developed a sort of murky brown highlighting on the entire lace design.

And sure enough, there amidst the laundry was the culprit – a rather sorry-looking black leather glove.

"It was an accident," pleaded its owner plaintively.

Well of course it was. If I thought for one moment that it was deliberate ...

The trouble is, as is the way with these things, this is not the first such episode. Pens are regular visitors to our washing machine. His pill box has been there at least once too, clattering mournfully at the door as the cycle continued, early escape impossible. And items of paper, from pay slips to scribbled notes to hankies to money, inevitably end their days as wet confetti, clinging to everything.

I have t-shirts (always white ones, of course) that have ink stains on them – but this was the worst such incident. And it’s worth pointing out that his clothes never seem to be affected.

I am now left to wonder whether I can find some white restorer tomorrow when shopping and whether that will actually work – or whether, as a last resort, I’ll have to deploy the bleach. An effort will be made, though. Because it’s a nice top.

Not, I suspect, that The Other Half is unique in this capacity. Or in such other dark male arts as Making a Mess in the Bathroom – which has, in his case, even involved the extraordinary feat of getting toothpaste on a mirror that is at least 40cm away from the basin and at a height several centimeters beyond that of him himself.

Missing the Toilet is beyond cliché, Never Managing to Wash Pans Out properly is the norm and Making a Mess in General is a given.

Anyway, I was piqued. To say the least. And thus I spent the first part of this morning engaged in a semi-frantic quest to put together an outfit that would be okay for work, but might just look a bit rock and roll for this evening.

I decided against jeans – they never look quite right on me – and opted for soft pants, black with a fine pinstripe, smart and very comfortable to wear; a white vest t-shirt, with a large white, granddad-collared linen shirt over it, studded leather cuff, black and silver earrings, a couple of good statement rings and a very large, chunky chain pendant, plus white leather flip-flops with silver buckle detail and my slightly battered black Tula handbag.

I was also sporting a short string of black beads, but they broke in the ladies at work. I will not believe that I am jinxed.

Slap will be applied later. But all in all, not bad, though I say so myself, and even if it doesn't count as a vision in blue. 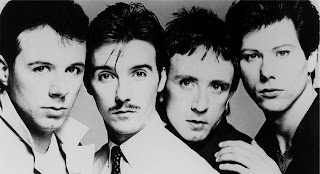 It’s almost 4pm now. I am almost reaching a frenzy of excite-ment. Another hour or so and I shall be off to the west of London, with my biggest hope being that I am not disappointed.

For tonight is the Hammersmith leg of the Ultravox reunion tour and, having missed them in their heyday, I finally get to see them live, 30 years after starting to listen to their music.

Frankly, I can’t recall quite such a level of excitement for any other comparable event.