A cross to bear


The Sign of the Cross: Travels in Catholic Europe by Colm Tóibín 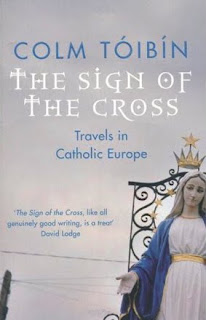 Colm Tóibín, brought up a Catholic in Ireland, set out in this 1994 book to understand something of his own background. Having grown up in a family where relatives went on pilgrimages – including his terminally ill father to Lourdes when he was in his early teens – he has long ceased believing in the central tenets of Catholicism, but remains fascinated by the history of the church that he was baptised into and by people's links with it.

But as Tóibín discovers on his travels around Europe, Catholicism means different things to different people in different places.

In Seville, for instance, where Holy Week sees dozens of marches around the city with statues of the crucified Christ and the Virgin Mary, he discovers that many of the men who volunteer to carry the statues have no personal religion and do not even attend Mass during the rest of the year. For them, the marches are to do with local tradition and their cultural heritage.

But not all that Tóibín observes is like this. Medjugorje – a rocky, barren outcrop of Croatia – is the home to a shrine where six teenagers claim to have seen apparitions of the Virgin Mary in 1981. They say that the Virgin has blue eyes and speaks Croation. And they continued to have apparitions and receive messages from her.

Tóibín, who visited during the Balkans conflict, never doubts the sincerity of the six – or of the pilgrims who have radically changed Medjugorie – but what he clearly finds discomforting is the link between Croation Catholicism and a nationalism that remains unapologetic for being a Nazi client state, for persecuting and exterminating Serbs (Orthodox Christians) and even retaining much of the symbolism etc of that era (the national football team's badge and shirts are based on the badge that was worn by Croation Nazis).

In Poland, Tóibín is uncomfortable at the presence, so near to the Auschwitz concentration camp, of a Catholic convent, given that country's long history of anti-Semitism and since the majority of those who were killed there were Jewish. Is it an appropriate place? It's an interesting question at a time when the issue of whether a mosque should be built a couple of blocks from the site in New York of the World Trade Towers that were attacked on 9/11 is causing such discussion.

In Slovenia, it is suggested that perhaps the reason that Croat and Polish Catholicism have become so intertwined with extreme nationalism, while Slovenian Catholicism has not, is that the latter country experienced the Reformation and rationalism.

Elsewhere on his travels, Tóibín is astonished to discover that there are no Scottish Catholic writers of note in that country – while his visit to Glasgow also reveals both sides of the sectarian divide spouting lies/myths about their neighbours or their own perceived victimhood.

In London, he finds then MP and Catholic convert Anne Widdicombe to be particularly English in her attitude and faith (she hadn't converted for "the smells or the bells or the saints", for instance), while he sees, in the 5 November celebrations in Lewes – known for their continuing anti-popery (but now apparently down to one, unnoticed banner) – nothing other than displays for the heritage industry, in a country that has lost any interest in such parts of its history.

In one chapter, which initially seems at odds with the rest, Tóibín describes his experiences as an adult at a retreat where people had gone to work through difficult issues with a psychiatrist who had developed new techniques for bringing out repressed memories. In the author's case, these were to do with the death of his father when he was 14. The retreat was not religious, but at the end of his own experiences, finally letting out the grief that had been bottled up for decades, Tóibín found himself wanting – needing – to make the sign of the cross in the air as a way of dealing with, of expressing that grief, and of bidding farewell to his father.

The non-believer needed the rituals of his childhood; the rituals that bored him as a child (and leave him feeling similarly blank when he experiences masses across Europe, including in St Peter's in Rome) as a way of dealing with his own life. The book itself, then, is partly an extension of that: an excavation of memory. And he went on to further explore his father's death in the 1999 novel, The Blackwater Lightship. 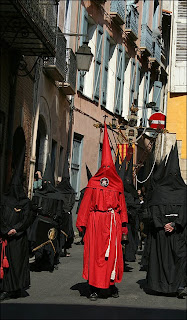 Tóibín is an excellent writer of both fiction and non-fiction. That was partly why I read it. But also too, I have been intrigued by European Catholicism since an Easter visit to Perpignan some four years ago when we witnessed the sanche on Good Friday: the 'march of the penitents', the like of which is described in this book.

But I also read it because it seemed a natural step after Wolf Hall, with that book's fictionalised examination of the English Reformation.

Catholicism, I think, has understood human nature far more than Protestantism: it has catered for a need for drama and emotion more; the ritual of confession seems to comprehend more and provide for human 'failings' in a way that a personal relationship with God, with no intercessors, cannot. Catholicism can be seen as a polytheistic religion rather and a monotheistic one – with its pantheon of saints and a goddess in Mary.

Protestantism is less poetic, more serious. 'The Protestant Work Ethic', for goodness sake. As someone tells the author in Glasgow, you want the Calvinist as your accountant, while the Catholic will be the romantic, the dreamer. Could a Protestant really have created the word – and the concept – of Utopia, even if Thomas More's book was light years removed from his own attitudes and behaviour?

Yet as Tóibín puts it: "Protestants one Catholics nil" on the music front, after hearing a Bach's St John's Passion in a Protestant church in Regensburg one Good Friday. Later, he feels disappointment that none of the great classical settings are used for the service at St Peter's: it's the same rather drab and uninspiring music as at home in the Enniscorthy cathedral of his childhood. Yay! We can create great art too.

What is extraordinary is how much one's own religious heritage clings, as Tóibín found as he dealt with the loss of his father. Wolf Hall makes quite clear the issues of the democratisation of religion – of thought – that were part of the Reformation across Europe, and a direct result of the invention of the printing press. But I cannot help wondering why – apart from it being interesting in an anthropological and historical sense – religion still seems so important to me, even though, like Tóibín, I no longer have the actual beliefs. Those simply drifted away from my shoulders a decade ago, without a shred of pain or any sense of loss.

Has anything else from my childhood left such an imprint, to the effect that even now, I seem to feel a need to point out the theological fallacies of Catholicism? That has no relevance to the other, current issue, of religion in general and the public sphere.

Perhaps it's simply inherited hatreds? But then why do I not have the same attitudes as my parents – and my father in particular – other, related things, such as Ireland and Celtic FC?

My sympathies, since 'O' Level history taught me the phrase, "too little, too late", have always been with the Nationalist communities in Northern Ireland.

In that peculiar way that so many English football fans also have a Scottish team that they sympathise with (it doesn't work the other way around!), my father has always considered Rangers – one half of the passionate football rivalry in Glasgow – to be infinitely superior, as they are Protestant. I've long sympathised with Celtic: the club might be Catholic, but it dumped sectarianism (if indeed it ever had it) decades ago.

Why is it that religion exerts such a pull on us; leaves such marks on us, even when we think that we have "put away childish things"? It's not difficult to understand why Richard Dawkins rails against such a mark being put on a child: no child is described as 'a socialist child' or 'a Conservative child'. Whatever one's parents' political beliefs, everyone accepts that you'll choose your own later. But religion is different: religion can be used to label an infant from birth.

Yet my father, oddly, always got on better with the local parish priest than he ever did with assorted Anglican clerics. Partly, I imagine, because they shared a love of whisky. Perhaps he felt an empathy on screwed-up ideas of sex. Sometimes, it was if his bigotry was merely for show.

The memories don't fit together into a coherent picture. And there's no box to see what it should look like.

But perhaps that's it. Religion as part of a rootedness – part of a picture of home and family and community. Not a singular thing, but merely one aspect, reflecting and part of a range of others, that present a whole, as the men in Seville appear to feel.

There are no roots or much of a family in my background. Perhaps that is why religion has loomed so large and still puzzles.

But Tóibín's book has perhaps offered some understanding of what the picture on the box might look like.
Posted by Amanda Kendal at 17:13