It's not something to trifle with 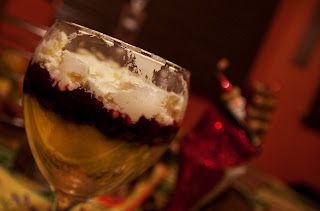 It was no trifling matter to whip up dessert on a day of what was really rather old school on the eating front.

We probably all imagine that a trifle is a quick and easy thing to knock up, because let’s face it, most of what we get to eat under such a name is hardly great.

Indeed, if one were suffering a touch of pedantitis, then the mere name ‘trifle’ could be taken to suggest that time and effort is a contradiction in terms when it comes to this famous (infamous?) British pud.

But having once mentioned it to The Other Half, and having my suggestion met with enthusiasm, it dawned that I’d better work out exactly what it was that I had airily declared could be on the menu for New Year's Day.

I picked Jane Grigson’s English Food off the shelf as an obvious place to start. Sure enough, there was a recipe, together with a rant about the worst sort of trifles – 'mean travesties' containing “poor sherry” and “powdered custards” … you get the drift. A woman after my own heart. Although in the interests of chronological accuracy, it's me that's the woman after her heart.

Now trifles are another of those dishes – like Lancashire hot pot or cassoulet – where there are as many different versions as there are people who make it.

There are important questions to be asked about this multi-layered confection:

• will it have jelly;

• will it have booze;

• what sort of booze;

• what sort of fruit and in what form;

• what sort of base?

I vaguely remember my mother making trifle occasionally. I don’t recall any booze, but there was jelly – and I strongly suspect that the custard was from a packet. Or rather, from a tin of Bird’s custard. And the base would be those sponge fingers that, if I'm reading correctly, are what Mrs Grigson refers to as "boudoir biscuits", noting that: "The French have always been more enterprising with boudoir biscuit cakes than we have." Bedroom biscuits? Excuse me while I shut the door before the double entendres gallop in.

I’m having none of that. If I'm going to all this trouble, there's going to be alcohol involved.

The best option seemed to be to make two.

Mrs Grigson’s recipe suggested macaroons for the base. Now, I’ve got a crush on these delightful little things at present and a recipe in Mousieur Roux’s Eggs book has been tempting me. However, that is for raspberry-flavoured delights and as such, isn’t in season.

So when I got into baking mode yesterday afternoon, I added vanilla seeds to the mix instead of dried and powdered raspberry.

Unfortunately, the mixture turned out to be rather more liquid than it should have been (perhaps, in reducing the overall amounts, I’d still added too much egg white – it’s not easy to divide an egg in two).

It started dripping straight through the icing bag as I filled that, and then sort of merged together on the lined baking tray to form a large, irregular splodge.

Fortunately, when you’re planning to use the end result to line the base of a trifle, this doesn’t actually matter too much.

I baked it anyway, let it cool and stashed it away until today, when it was scraped off the baking paper and deposited into large glasses. One portion then had orange juice added to soak the macaroon mixture. The other had Fino sherry.

And so to the custard. Using Mrs Grigson again, I took a whole egg and one yolk and beat that into some flour (she didn’t say what sort, so I plumped for plain), heated single cream, poured that over the egg mixture, poured it all back into the pan and then stirred away in the expectation of a stiffening custard. One was then supposed to add caster sugar to taste.

Impudently, it misbehaved and turned into something more closely resembling lightly scrambled eggs.

I tried again, using cornflour instead of plain flour and taking even more care than before. The outcome was the same.

I walked around the corner and bought more cream. And turned to the goddess of culinary reliability, Delia.

Now Delia’s trifle isn’t to my taste – I am absolutely not including bananas, for instance.

But her custard looked far more sensible, with three yolks, cornflour and 30g of sugar all beaten together and then heated double cream added to that.

It worked. And was duly deposited as carefully as possible into the glasses and allowed to cool.

Next stage – the easiest one: a layer of raspberry jam (good French stuff). Then, for the topping, back to Mrs Grigson, who recommends using Elizabeth David’s ‘everlasting syllabub’.

Now I have no idea whether this syllabub really is ‘everlasting’ and, to be frank, I had no desire for it to everlast. All it had to do was wait around patiently for a few hours before I could dip a spoon into it.

So, sugar, cream and booze. What’s not to like? Well, if you’re The Other Half, the booze bit, obviously. So more orange juice and some grated zest were whipped into cream and sugar and went on top of his trifle. Mine, whipped separately, involved more Fino.

This is fiddlier than making a crème brûlée, for goodness sake! But at last the trifles were ready.

For a first course on this day of old school eating, I’d planned belly pork. I'd been in luck at Borough Market yesterday, getting my hands on one of the last pieces available.

Scored and with salt rubbed into the skin, I peeled some garlic, pulled the leaves off some sage and rosemary, grated some zest from a lemon, added the juice and some olive oil, and pulsed the whole lot together, before spreading it over the meat and then placing that on a rack in my roasting tray, with a little water below.

It went in at 180˚ (my fan oven) for 30 minutes (should have been 20, but no recipe ever accounts for my oven), after which the temperature was reduced to 150˚ and it was left for a further two hours, with occasional checks primarily to go ‘Oooo’ and ‘Ahhh’ and ‘Ummm’.

For the side, there were mashed potatoes and peas. Suitably old school.

Belly pork is one of those dishes that is a slow cook. Somehow, though, I feel that it should be slower than almost every recipe I could find.

Okay, not the nine hours recommended by Heston Blumenthal on the Waitrose website, but more than two and a half hours. I finally found a couple of recipes this afternoon for four hours, but by that time, it was too late for today – I didn’t want to delay eating that much.

I don't know why, but the crackling refused to crackle – perhaps it really does need at least another two hours. I suspect that most recipes have worked it out to around two to two and half hours because, by our modern standards, that's very slow cooking.

Still, it was very tasty – and the trifles afterwards were equally tasty.

But I'll give you all a guess which one Otto decided she should be allowed a taste of. And no, it wasn't the one with orange juice and zest involved.
Posted by Amanda Kendal at 17:56